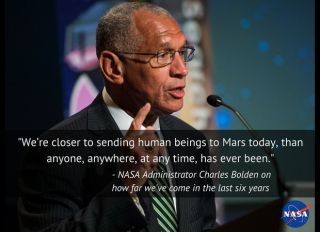 "Mars matters," was the central theme of a speech by NASA administrator and former astronaut Charles Bolden today (April 12) at the National Space Symposium, perhaps the largest international spaceflight meeting in the world.

Bolden noted that almost six years ago today, President Obama announced at the Kennedy Space Center that NASA should pursue a human mission to Mars. That speech is "what I consider one of the landmark speeches in the history of space science," Bolden said.

"Even though we here recognize why Mars matters, it's important every now and again to remind ourselves, so that we'll be more effective in reminding our friends and neighbors," Bolden said, before listing various reasons why a mission to Mars could help humanity. After each item, he asked the audience to repeat the phrase, "Mars matters."

"When Robert Goddard first started publishing his research and telling people about his belief that we'd someday be able to send a rocket all the way to the moon, the idea seemed so, well, 'out of this world' that people laughed at him. The press nicknamed him 'moon man.' Others called him 'moony' and 'moon mad,'" Bolden said. Robert Goddard was a pioneer of American rocketry and is the person for whom NASA's Goddard Spaceflight Center was named.

Bolden also discussed NASA's recent accomplishments that, he said, might have seemed unbelievable not long ago, including the agency's plan to have commercial spaceflight companies launch astronauts into space from American soil. Since the retirement of the space shuttle program, the only option for sending humans to space has been on board the Russian Soyuz capsule.

"So here we are six years later, and I don't know about you, but if you had told me back then that today I’d be talking to you after having recently welcomed Scott Kelly home from his year in space aboard the International Space Station — and by the way, that the Station had been recommended for extension not once but twice by the president and Congress, let’s just say I would have been quite the skeptic!" Bolden said.

Bolden reiterated a claim he has made in past speeches that there is a "consensus starting to emerge in the scientific and policy communities" around NASA's "plan for sending American astronauts to Mars in the 2030s." However, a 2014 report cast serious doubt on the feasibility of NASA's current timeline for a human mission to Mars.

Much of the audience gave Bolden a standing ovation at the conclusion of his talk.

Earlier in the day, while speaking as part of a panel that included 12 other global government spaceflight leaders, Bolden said that many of the people on the panel would not be holding their current positions for much longer, and that he would likely be the first to depart his current position. The position of NASA administrator is appointed by the White House. With a new presidential administration coming in at the end of 2016, it is possible that a new administrator well be selected.