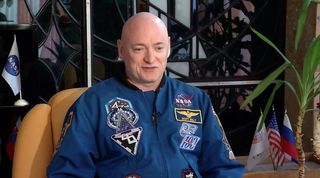 NASA astronaut Scott Kelly, who has spent more time in space than any other American, retired from the agency on April 1, 2016.
(Image: © NASA)

Record-setting NASA astronaut Scott Kelly has handed in his spacesuit.

Kelly, who recently wrapped up an unprecedented yearlong mission aboard the International Space Station (ISS) and has spent more total time in space than any other American, officially retired from NASA today (April 1). The astronaut recently reflected on his spaceflight experiences and accomplishments in a video interview, which you can watch here.

"When we do things that are really hard, we can achieve great things — and that has worked as a great model for me," Kelly said in the interview, which was conducted March 25 during a trip to Russia to commemorate the one-year space mission with cosmonaut Mikhail Kornienko. (Kelly referred to fellow one-year crewmate Kornienko as his "brother from another mother," and said the pair will remain lifelong friends even if Kelly never gets back to Russia again.) [One Year in Space: Epic Space Station Mission in Photos]

"#ThankYou, @NASA! It's been an incredible 20 years! #YearInSpace," Kelly, who was selected as a NASA astronaut in 1996, wrote on Twitter March 31.

Though Kelly has now formally left NASA, his long association with the space agency will continue. Kelly is still being debriefed about the one-year mission, for example, and will continue to undergo tests so scientists can determine how long-duration spaceflight affected his body.

Kelly's identical twin brother Mark, a former NASA astronaut himself, is also still being tested; Mark stayed on the ground during Scott's ISS mission, and researchers are comparing the duo to identify any genetic changes that spaceflight induced in Scott.

The one-year mission was not without its difficulties. Shortly after Kelly's arrival, two cargo ships failed to reach the orbiting complex. If one more resupply failure had occurred, the ISS crew might have had to start rationing food, according to a PBS documentary about Kelly and Kornienko's mission.

Kelly also battled minor issues with some of the scientific experiments he helped conduct. For example, the "Veggie" experiment, which grew the lettuce that Kelly ate in orbit in a historic first, faced some mold problems when zinnias were grown in a subsequent crop. With approval from the ground, Kelly took over caring for the zinnias and saved enough of them to see blooms in space a few weeks later.

All told, Kelly racked up a total of 520 days in orbit during four space missions — two space shuttle flights and two ISS missions. Kelly's first flight lifted off in 1999, and his last, the one-year mission, touched down last month.

"Going to Mars is a bunch of baby steps, and it started off with the first human in space, Yuri Gagarin," Kelly said in the video interview.

The one-year mission is "another one of those steps," he added. "I'm proud to be a small part of that."