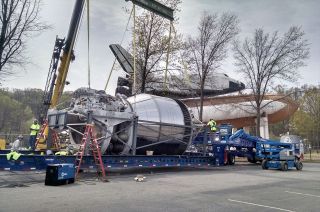 A last-of-its-kind rocket stage that was left over from a cancelled, controversial chapter in NASA's space shuttle history is hitting the road for Cleveland.

The Centaur-G Prime liquid-fueled upper stage, which was built in the 1980s to launch with a robotic probe inside the space shuttle's payload bay, was hoisted by a large crane onto a wheeled trailer at the U.S. Space & Rocket Center in Huntsville, Alabama on Wednesday (March 30). The 30-foot-long (9 meter) artifact had been on exhibit adjacent to the museum's full-size space shuttle model, Pathfinder.

"The Centaur is being moved from here to [NASA's] Glenn Research Center in Ohio, where it will be restored and put on display," stated Tim Hall, the vice president for business and media initiatives at the rocket center. "Glenn managed the Shuttle-Centaur program." [NASA's Space Shuttles: Where Are They Now?]

"This is the 75th anniversary of Glenn Research Center, so the timing for us works out really well," David DeFelice, the community relations and artifacts manager at Glenn, said. 'We're planning to have an open house May 21 and 22, so we'll be able to have it here and set up for folks to be able to take it in."

Originally scheduled to fly in 1986, the Centaur-G's use on board the space shuttle was cancelled after the Challenger accident that year. At the time of the tragedy, two Centaur-G Prime stages were in preparation to launch with NASA's Ulysses and Galileo planetary spacecraft to study the Sun and Jupiter, respectively.

A cryogenic liquid-fueled stage, the Centaur was deemed to be too much of a risk to launch on the space shuttle lest another in-flight emergency occur. Although safety precautions had been in place, the program was shelved in favor of a solid-fueled upper stage, which was later used to launch Ulysses and Galileo on the shuttle.

"The Shuttle-Centaur required a lot of complex equipment and was filled with liquid hydrogen and liquid oxygen that would have been troublesome to maintain in the payload bay throughout launch and on-orbit operations and posed a greater risk than traditional solid propellant stages," said Ed Stewart, director of exhibits and curation at the Space & Rocket Center.

One of the Centaur-G Prime stages built for the shuttle is believed to have been modified for the launch of NASA's Cassini probe to Saturn atop a Titan IVB rocket in 1997.

The Space and Rocket Center had labeled the Centaur-G now being moved as a mockup, though there is some data that points to it being the other stage originally built for the program. Glenn Research Center's records identify it being a high-fidelity ground test article.

The Centaur-G Prime was exhibited in Huntsville courtesy of General Dynamics, the contractor for the stage, and the nearby NASA Marshall Space Flight Center, which had the responsibility of qualifying the hardware. Glenn Research Center (formerly Lewis), where the stage is now bound for display, developed the Centaur stage, which first launched atop an Atlas rocket in 1963.

"We're going to put it in front of our administration building, near the main gate," said DeFelice. "It is a good prominent viewing spot for one of the most significant artifacts – and projects – that we have had over the years, and that is the overall Centaur program."

Work to move the Centaur began earlier in March but was delayed as the center needed to arrange for a larger crane to hoist the 14,000-pound (6,350 kg) artifact. In addition to the stage itself, the CISS — or Centaur Integrated Support Structure — that would have held the stage in the shuttle's payload bay is also being shipped to Ohio.

The Centaur-G and CISS are expected to arrive in Ohio by early to mid-next week.

"We are honored to have shared the Centaur story," said Stewart. "The rocket center is one of the nation's premiere space museums and we believe the Centaur helped us tell the shuttle story in a powerful way."

See more photos of the Shuttle-Centaur being moved onto its transport at collectSPACE.