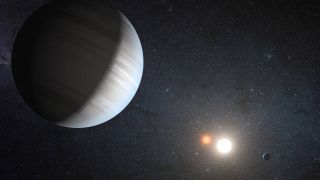 An artist's illustration of a circumbinary system, in which planets orbit two stars. A recent study examined what happens to circumbinary planets when they have a highly elongated orbit
(Image: © NASA Ames/JPL-Caltech/T. Pyle)

In "Star Wars," the planet Tatooine orbited twin stars. Now, a new study suggests that, in the real world, twin suns may act like Death Stars, either destroying worlds or hurling them into interstellar space.

This finding suggests that these destructive stellar pairs could be producing rogue planets that drift through the Milky Way unbound to any star, the authors of the new research said in a statement.

Although Earth's solar system has only one star (the sun), most stars like the sun are not solitary. Rather, they exist in binary systems — where two stars orbit each other — or in systems with even more stars living together. Just one-third of stars like the sun are single, while two-thirds are multiples. [How 2 'Tatooine' Planets Orbit Twin Stars (Infographic)]

Many scientists once doubted that circumbinary planets — worlds that orbit both the stars in a binary system — could exist. Those previous studies suggested that the gravity of two stars would pull the planets into unstable orbits, thus leading the system to fall apart quickly. However, in the past five years, astronomers have detected multiple circumbinary planets.

To learn more about the origins and fates of circumbinary planets, the authors of the new research carried out computer simulations to model binary systems consisting of a primary star much like the sun and a secondary star about one-tenth the size of the sun. The secondary star was separated from the primary one by a distance of 1 astronomical unit (AU), which is the average distance between the sun and the Earth.

The planets in these simulations were initially located 1 to 4 AU from the center of gravity between the two stars. The researchers also varied how oval-shaped or eccentric the orbits of the planets were.

In the simulations, as the researchers increased the planets' eccentricities (the degree to which the orbit is elongated, rather than circular), the planet's orbital instability also increased. The researchers found that about 80 percent of the time, circumbinary planets in unstable orbits were flung from binary systems — by far the most common fate for unstable planets.

"This process could be a possible source of free-floating planets within our galaxy," said study lead author Adam Sutherland, an undergraduate astrophysicist at the University of Chicago.

The other 20 percent or so of the unstable planets collided with one of their host stars, about two-thirds of the time with the secondary (smaller) star. Unstable planets only rarely survived 10,000 years of simulated time.

There are ways to determine if binary star systems once hosted planets, such as by looking for pollutants within the stars that could be the remains of matter that fell into them, Sutherland said. Astronomers have already detected single stars contaminated with heavy elements, suggesting that they may have chowed down on asteroids and bits of planets.

Furthermore, astronomers might have already detected a circumbinary planet whose host stars might have flung it far away from them. The alien planet HD 106906b, a gas giant 11 times more massive than Jupiter, orbits the star system HD 106906 at a distance of 650 AU.

"Scientists recently discovered HD 106906 is actually a binary system," Sutherland told Space.com. "This planet is farther away from its stars than anyone thinks planets can form, so it might have migrated to its current location due to the mechanism we focused on."

In the future, Sutherland and his colleagues will model a greater variety of binary systems and planetary orbits. The scientists also would like to see if planet-scattering activity could recreate systems like HD 106906.

Sutherland and his adviser, Daniel Fabrycky, an assistant professor of astronomy and astrophysics at the University of Chicago, detailed their findings in the Feb. 10 issue of The Astrophysical Journal.