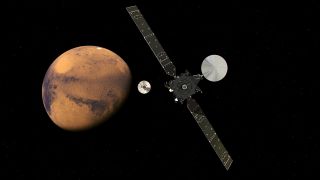 An artist's illustration of the European Space Agency's ExoMars 2016 mission, showing the Trace Gas Orbiter releasing the Schiaparelli lander as it arrives at the Red Planet. This latest Mars mission launched on March 14, 2016 and will arrive on Oct. 19.
(Image: © ESA/ATG Medialab)

DARMSTADT, Germany —In 1877, Italian astronomer Giovanni Schiaparelli reported that he observed intriguing thin lines on the surface of Mars.

The discovery of those "canali" proved sensational. It fueled wild speculation that Earthlings were not alone in the solar system. American astronomer Percival Lowell interpreted the channels as canals dug by thirsty Martians desperate to get water flowing through their civilization.

Schiaparelli's canali turned out to be an optical illusion, and nearly 150 years later, scientists can safely say there are no shovel-wielding aliens living on Mars. Though the history of Mars exploration is littered with failures, dozens of robotic spacecraft have successfully made it to the Red Planet over the last 50 years. They've photographed its surface, analyzed its atmosphere and dug into its soil. Scientists now know the topography of Mars in greater detail than many parts Earth. [Read: Europe's 2016 ExoMars Mission Launches Toward Mars]

But humans keep sending missions to Mars because the central question Schiaparelli inspired remains: Is there, or was there ever, life elsewhere in the solar system? The launch Monday (March 14) of the first phase of ExoMars suggests scientists still think Mars might be the best place to look for an answer.

Mission scientists here at the European Space Agency's (ESA) Space Operations Centre (ESOC) cheered when the first autonomous signal came in from ExoMars, at around 5:29 p.m. EDT (2129 GMT). It was the first indication that the robotic spacecraft made it through the launch alive. (Liftoff occurred nearly 12 hours earlier, at 5:31 a.m. EDT.)

"It's an amazing first step for us in Europe,"said Mark McCaughrean, senior advisor to ESA's director of science. "Everything's gone great."

The ExoMars mission is led by ESA in partnership with the Russian space agency, Roscosmos. The first of the mission's two phases launched Monday (March 14) aboard a Russian Proton rocket. After a series of crucial maneuvers, the mission's orbiter and lander are on a path to Mars, where they should arrive in mid-October.

The 2016 ExoMars mission includes the Trace Gas Orbiter, or TGO, which will circle Mars looking for atmospheric gases that might hint at life below. A landing capsule named Schiaparelli —a nod to that 19th century astronomer — is hitching a ride to Mars on TGO. Its landing on the surface of the Red Planet will pave the way for the second step of the mission, ExoMars 2018, which will put the first European rover on Mars.

Methane: the key to finding life on Mars?

"In science, in general, you're trying to get answers, but you get a few answers and then you get even more new questions," said Thomas Reiter, a former astronaut and ESA's director of human spaceflight and robotic exploration. He said that the same is true with Mars.

"The first missions gave some insights into this neighboring planet and its geological formations, and they built up the indications that there could have been life,"Reiter told Space.com. Now, he said, he hopes the technology on ExoMars will be sophisticated enough to find evidence of life on Mars.

ESA and its Russian partners are searching for signs of life that are much subtler than the canals Percival Lowell and others hoped would be on Mars. Today's scientists aren't obsessed with finding earthworks, but the researchers at ESOC for the launch were at least mad about methane.

"We already know the bulk constituents of Mars' atmosphere very well," said Manish Patel, of the Open University in the United Kingdom. "What we don't know about are the trace gases."

Trace gases are gases in concentrations of less than 1 percent. Patel, who is the co-investigator of NOMAD, one of TGO's gas-detecting instruments, noted that scientists talk about Martian methanein parts per billion; the gas is a small component of Mars' already thin atmosphere, which is largely made up of carbon dioxide. But this tiny amount of methane gas has significant implications because it could come from simple life-forms.

About 90 percent of the methane in Earth's atmosphere comes from biological sources. It gets burped out by cows, released from rice fields and spewed by decomposing organic matter in landfills.

Methane should have a lifetime of 300 to 600 years in the Martian atmosphere before getting destroyed by harsh radiation, so the methane found on Mars might be quite young, said ExoMars project scientist Jorge Vago. If the gas indeed comes from simple lifeforms, that means there's a good chance those tiny beings are still around today.

Still, there's the possibility that methane on Mars doesn't require an alien life explanation, but the finding would nonetheless be interesting to scientists. The methane might have gurgled up from a hydrothermal source underground. Scientists have speculated that Mars might have, or have had, the right geological conditions for serpentinization to take place, by which certain minerals like olivine can react with water to produce serpentine. This reaction also produces hydrogen, which, through reactions with carbon dioxide, can produce methane.

ESA's Red Planet probe Mars Express previously detected methane on Mars. And NASA's Curiosity rover also measured spikes of the gas. But ESA officials said TGO has 1,000 times better sensitivity for measuring gases than did previous instruments sent to Mars. And by observing the trace gas levels continually, ExoMars scientists hope to build a 4D, global picture of the Martian atmosphere and understand how it changes seasonally, Patel told Space.com. This way, when they observe a methane plume, the researchers might be able to link it to a source on the ground, Patel added, though he acknowledged that the task is "going to be incredibly difficult."

Identifying sources of methane could also help project managers to pick the landing site for the next ExoMars mission, in which a rover will dig dirt samples 6.5 feet (2 meters) underground, far deeper than any previous rover. There, ESA scientists hope they'll find microbes that have thus far eluded other Mars rovers.

"There's a big chance with the ExoMars rover we will find organics on Mars," Vago said.