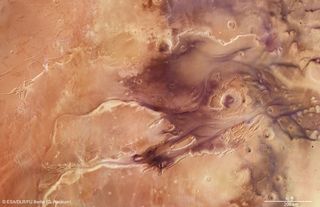 Mars Express — the first European spacecraft built to investigate another planet — has been snapping color and 3D images of Mars for 10 years.

To honor the Martian anniversary, the European Space Agency has released a spectacular new fly-over video of Mars showing off some of the striking images captured by the Mars Express spacecraft from its place in orbit.

The flood plain in the video is called Kasei Valles, and scientists think it was created during intense flooding events on Mars, ESA officials wrote in a description. The entire video covers an area of about 598,000 square miles (1.55 million square kilometers), which is about equal to the size of Mongolia. Kasei Valles is one of the biggest outflow channels on Mars. [See more photos Europe's Mars Express mission]

The animated video is based on a 67-image mosaic taken by Mars Express of the Kasei Valles, first released in June 2013, a decade after the spacecraft's launch.

"Kasei Valles has likely seen floods of many different sizes, brought about by the changing tectonic and volcanic activity in the nearby Tharsis region over 3 billion years ago," ESA officials wrote in a release in June. "Snow and ice melted by volcanic eruptions also likely contributed to torrential, muddy outpourings, while glacial activity may have further shaped the channel system."

Mars Express first started imaging the Red Planet in color and 3D on Jan. 14, 2004, and has sent back some amazing views of Mars since then. The probe launched in 2003 with a Mars lander, called Beagle 2, that failed before reaching the surface of the planet.

The Mars Express orbiter accomplished its main science objective less than a month after arriving in orbit around Mars. The probe made its first major discovery on Jan. 23, 2004, when it found water ice and carbon dioxide ice on the Red Planet's south pole. Mars Express' team of researchers confirmed the ice finding in March 2004.

The probe is also responsible for finding methane — a possible indicator of current microbial activity on a planet — in the Martian atmosphere, an unexpected discovery. Later observations from NASA's Curiosity Mars rover has not found hints of methane gas, and scientists are still searching for the elusive gas. India's first Mars-bound spacecraft — currently on its way into Martian orbit — is carrying a methane detector among its suite of instruments.