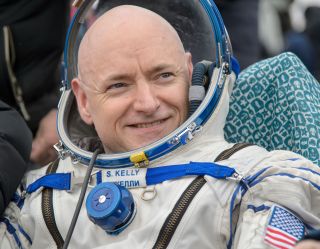 NASA astronaut Scott Kelly smiles after returning to Earth to end a 340-day mission to the International Space Station, ending his nearly yearlong mission. He and two Russian crewmates landed in a remote part of Kazakhstan on March 2, 2016 (Kazakh time).
(Image: © NASA/Bill Ingalls)

His skin feels on fire, his body is weak and he can't shoot hoops, but Scott Kelly said even after a year in space, he'd still like to go back — but he doubts it will be with NASA.

The veteran astronaut now has spent 520 days in space across four missions, having just finished nearly a year on the International Space Station. Kelly told reporters today (March 4) that it's time to let somebody less experienced from NASA fly in space, but added that he's still holding out hope to fly on a commercial spacecraft.

"Even my brother, who has been retired for a bunch of years, he hasn't given up the idea that he's going to fly in space again," said Kelly, referring to his twin, veteran shuttle astronaut Mark Kelly. (Mark Kelly works with World View, a commercial space venture to fly passengers on high-altitude balloons.) [Home! Year-in-Space Astronaut Scott Kelly's Earth Return in Photos]

"We have so many talented people in our [astronaut] office," Scott Kelly said. "There's no reason to fly me again. Fly somebody else who hasn't had as much opportunity to do it. But I don't think I would ever say I am absolutely, 100 percent done."

Kelly made his remarks on NASA TV today as part of a televised press conference in Houston. He landed successfully in Kazakhstan on March 1 after spending 340 continuous days in space, far surpassing the record of any other American. Sharing Kelly's yearlong mission on the station was Russian cosmonaut Mikhail Kornienko. Their journey was the longest orbital mission since the days of the Mir space station, in the 1990s.

Like all astronauts returning from space, Kelly is undergoing a recovery period. He described muscle aches and tiredness as his body re-adjusts to Earth gravity. Also, he said that his skin has not been used to touching anything for months, leading to the sensation of burning when he sits for long periods, for example.

Psychologically, Kelly said he feels fine, although he hasn't adjusted yet to the looser schedule of his time on Earth. On the space station, astronauts are scheduled almost down to the minute with things to do and tasks to accomplish.

"I think there will be a point here soon where I'll start maybe feeling that kind of culture shock, or whatever else you would want to call that, having so little on the space station and so few choices about what you are doing every day," Kelly said.

The astronaut added that the time in space felt long, but he focused on milestones such as when the next crew would arrive, or what science experiment would take place next. He said he could have remained longer "with a good reason" such as his return flight being delayed, adding that this ability to stay longer bodes well for people heading to Mars for a couple of years.

He also paid tribute to NASA's selection process, saying that the agency does a good job of finding people who are able to live happily in a confined space for months at a time. [The Human Body in Space: 6 Weird Facts]

Kelly said he was surprised by the attention paid to his mission, which some say generated more interest in the space station program than has been present for many years.

His social media posts, Kelly added, were not done by him alone. Kelly's long-time partner, Amiko Kauderer, is on NASA's social media team and helped Kelly craft the posts. Kauderer was in the audience today listening as Kelly spoke to reporters.

"It made the experience for both of us, I think, more rewarding," Kelly said. "Rather than our conversations being on a daily basis — what did I do today, I went to the store, I went to the gym, I went to work — we could work on this as a project together."

Kelly said he didn't quite feel homesick in space, but that as family events and crises happen, astronauts get the sensation that they want to be at home to support their loved ones. This was particularly true during Kelly's last, 159-day mission to the ISS, when his sister-in-law, then-Congresswoman Gabrielle Giffords, was shot during an event and seriously injured. (Giffords has since made a partial recovery.)

The astronaut added that one of his next goals will be to visit an area of the Himalayas that he saw from space, which included lakes and appeared "very remote and very beautiful." The first step, he quipped, will be finding out what country it's in and how possible it is to get there.