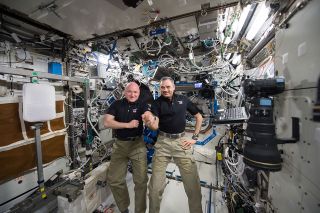 An astronaut and a cosmonaut are wrapping up a nearly yearlong mission on the International Space Station (ISS) today (March 1), the longest in the 16 years since humans began continuously occupying the orbiting outpost.

But Scott Kelly and Mikhail Kornienko's 340 days in space place only fifth on the list of the longest spaceflights of all time, coming in behind four cosmonauts' previous missions to the former Russian space station Mir. Those missions each lasted more than a full year.

Launched on March 27, 2015, Kelly and Kornienko will land Tuesday night (March 2) on the snow-covered steppe of Kazakhstan, returning to Earth with cosmonaut Sergey Volkov on Russia's Soyuz TMA-18M spacecraft. Their "One-Year Mission," the first for the International Space Station, was devoted to collecting medical data to support future, longer missions out into the solar system, including sending astronauts to Mars. [The Most Extreme Human Spaceflight Records]

"I'd like for the legacy of this flight to be that we can decide to do hard things that will take us farther away from the Earth, and this is one of them," said Kelly in a recent in-flight press conference. "I am hopeful, and I think we will learn a lot about longer-duration spaceflight and how that will take us to Mars someday.

"I'd like to think this is another of many stepping stones of us landing on Mars sometime in our future," he added.

Past years in space

Prior to Kelly and Kornienko's expedition, four Soviet-era cosmonauts each spent a full year or more orbiting the Earth.

The first humans to complete a trip around the sun while in space were Vladimir Titov and Musa Manarov, who logged just shy of a full year and one day — 365 days, 22 hours and 38 minutes — as crewmembers on the Mir space station, from December 1987 to December 1988.

Their record was broken eight years later by one of their former crewmates, Valery Polyakov. Living aboard Mir from January 1994 until March 1995, Polyakov set a record that still stands today for the single longest space mission: 437 days, 17 hours and 58 minutes.

"I think it is a little bit of a different experience being on this space station versus Mir," said Kelly when asked about Polyakov's experience. "We have better connectivity with people on the ground, [and] I think the environment is a little bit more comfortable.

"I really respect what he did back then, obviously," Kelly said, adding that he felt he could match Polyakov's time in space, if he was called upon to do so, but was also looking forward to coming home.

Unlike Titov, Manarov and Polyakov — and for that matter, Kelly and Kornienko, who knew they were embarking on a yearlong mission before they launched — the most recent cosmonaut to log a full 12 consecutive months in space learned the duration of his mission only after he was already living aboard Mir.

"I was prepared that my flight might turn out to be a little bit longer, but I never thought it would be twice as long," Sergei Avdeyev told a NASA interviewer in 2015.

Avdeyev ended up spending 379 days, 14 hours and 52 minutes in orbit due to an unexpected change in the length of another crewmember's stay.

"The last long-term space mission ... brought major data for investigations and research about how humans will feel during long-duration flights into space," Kornienko said in an interview before his current mission began. "I hope our mission [provides] an opportunity for others who will follow in our footsteps."

Though Kelly and Kornienko's expedition was titled the first "One-Year Mission" by NASA and its international partners, at 340 days, it is in fact 25 days shy of a full revolution around the sun.

"I really don't think about that kind of stuff," Kelly said when asked by a reporter if he was disappointed, if only slightly, about the 25-day shortfall to his mission. "For me, if I launched in March and land in March, that's pretty close to a year."

"So, no, I'm not slightly disappointed at all, actually," he said. "It is actually something I haven't really considered."

Even without the full 365 days, Kelly will return home having set new records for the most time in space by an American and the longest single mission by an American astronaut. There will be no similar national records for Kornienko, though, being the fifth Russian cosmonaut to fly on a one-year mission.