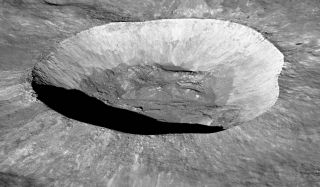 This view of the Giordano Bruno crater on the moon was taken by the Lunar Reconnaissance Orbiter Camera.
(Image: © NASA/Goddard/Arizona State University)

The moon shines in high-definition imagery in a new exhibit at the Smithsonian's National Air and Space Museum in Washington, D.C.

Visitors can enjoy a display of 61 large prints taken from the Lunar Reconnaissance Orbiter Camera (LROC) in an exhibit that is called "A New Moon Rises," which started Feb. 26. The pictures show off recent impact craters and volcanic activity on the moon, as well as crust buckling as the interior shrinks.

"Most people do not realize that the moon is still a very active place, and that it has breathtaking landscapes that are both familiar and alien," Tom Watters, senior scientist at the museum’s Center for Earth and Planetary Studies and curator of the exhibition, said in a NASA statement.

With thousands of images to choose from in LROC's mission — it's been orbiting the moon since 2009 — the exhibit's producers narrowed down the selection by sorting the images into six themes. The themes are Global Views, Exploration Sites, Discoveries, Vistas, Topography and Craters.

For more recent pictures, visitors can also check out LROC images projected onto a large screen. These pictures will be updated daily. The exhibit will also show off spare cameras and a large, 3D model of a young lunar crater.

"To me the LROC images reveal the moon to be a mysterious and beautiful place — a whole world just three days away," Mark Robinson, LROC instrument principal investigator at Arizona State University, said in the same statement. "It is my hope that visitors will walk away from the show excited about the moon."

LROC's discoveries not only include pretty pictures. The spacecraft has also found that lunar hydrogen is more prevalent on pole-facing slopes, suggesting that these might be good locations for colonists to mine water. LROC has also tested out laser communications technology, which is far faster than traditional radio.