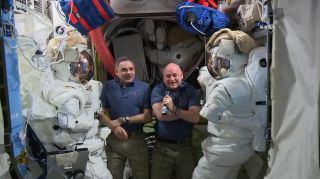 NASA astronaut Scott Kelly (right) and Russian cosmonaut Mikhail Kornienko speak with reporters from the International Space on Sept. 14, 2015, near the midpoint of their historic yearlong mission aboard the orbiting lab.
(Image: © NASA TV)

The first-ever yearlong mission aboard the International Space Station ends tonight, and you can watch its final moments live.

A Soyuz spacecraft carrying NASA astronaut Scott Kelly and cosmonauts Mikhail Kornienko and Sergey Volkov is scheduled to land on the steppes of Kazakhstan tonight (March 1) at 11:27 p.m. EST (0427 GMT and 10:27 a.m. local Kazakhstan time on March 2). You can watch the landing live at Space.com, courtesy of NASA TV; coverage begins at 10:15 p.m. EST (0315 GMT on March 2).

Kelly and Kornienko arrived at the International Space Station (ISS) in March 2015, embarking upon a 340-day space mission designed to help pave the way for future crewed journeys to Mars. Volkov is completing a more typical 5.5-month expedition; he arrived at the space station last September.

Tonight's landing will end Kelly and Kornienko's year in space, but there's still much work to be done on the mission. Scientists will continue studying the duo to assess how their extended orbital stay affected them psychologically and physiologically.

Some of this work will involve comparing Scott Kelly to his identical twin brother, Mark, himself a former NASA astronaut. Kelly stayed on the ground to serve as a sort of genetic control for Scott.

Kelly and Kornienko's 340-day mission has set an International Space Station mark, but they're about 100 days short of the all-time record for continuous space stays. Cosmonaut Valeri Polyakov lived aboard Russia's Mir space station for more than 437 days in 1994-95.