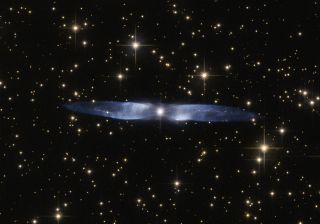 Symmetrical blue jets of gas stream out from the core of Hen 2-437, a planetary nebula, in this new image from the Hubble Space Telescope.
(Image: © ESA/Hubble & NASA; Acknowledgement: Judy Schmidt)

The glowing, symmetrical wings of the Hen 2-437 nebula shine in luminescent blue in a new image obtained by the Hubble Space Telescope.

Hen 2-437 is in a faint northern constellation called Vulpecula (the fox), which is located near Cygnus and Pegasus. The object was first found in 1946 by Rudolph Minkowski, who later discovered the more famous M2-9 Twin Jet Nebula.

"As shown by its remarkably beautiful appearance, Hen 2-437 is a bipolar nebula — the material ejected by the dying star has streamed out into space to create the two icy-blue lobes pictured here," European Space Agency officials said in a statement.

Hen 2-437 is known as a planetary nebula, which is one of the late stages in the lifetime of low-mass stars similar in size to the sun. When a star is in that stage, it grows into a red giant star and then sheds its outer layers into space. As fusion in the core ceases, the star remnants slowly cool as a white dwarf.

Although "planetary" is in the term "planetary nebula," the nebula is a collection of gas and dust and does not have anything to do with planet formation. The name is a misnomer based on observations by astronomer William Herschel, who discovered Uranus in 1781. He thought the blue-green tint of planetary nebulas he observed resembled the planet's hue.