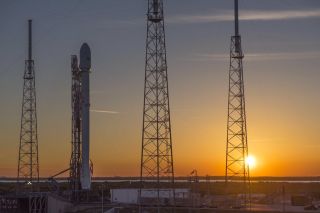 SpaceX's Falcon 9 rocket on the launch pad at Florida's Cape Canaveral Air Force Station, awaiting the launch of the SES-9 communications satellite. SpaceX has pushed the liftoff to Friday (March 4) because of high winds.
(Image: © SpaceX)

Editor's note: SpaceX has pushed the launch of the SES-9 commercial communications satellite — and the attempted landing of the first stage of the company's Falcon 9 rocket on a ship at sea — until Friday (March 4) because of high winds, according to SpaceX CEO and founder Elon Musk. The delay marks the fourth for the SES-9 mission, which was originally supposed to blast off on Feb. 24; below is Space.com's story about the most recent launch attempt, which was aborted just before liftoff Sunday (Feb. 28).

SpaceX aborted the launch of a commercial communications satellite less than a second before liftoff this evening (Feb. 28), delaying the mission yet again.

SpaceX's Falcon 9 rocket was scheduled to launch the SES-9 satellite from Cape Canaveral Air Force Station in Florida at 6:46 p.m. EST (2346 GMT) today, but that initial liftoff time was pushed back 35 minutes because a boat wandered into the mission's "keep-out zone," launch controllers said. At 7:21 p.m. EST (0021 GMT on Monday, Feb. 29), the Falcon 9's engines began firing up, but they shut down just as the countdown clock was reaching 0. .

The rocket may have been able to blast off today if not for the stray boat, SpaceX founder and CEO Elon Musk suggested.

The SES-9 mission — which also includes a daring attempt to fly the Falcon 9's first stage back to Earth for a soft landing on one of SpaceX's "autonomous spaceport drone ships" — has now been pushed back three separate times. Launch attempts on Wednesday and Thursday (Feb. 24 and Feb. 25) were scrubbed because of issues with the loading of liquid-oxygen propellant onto the rocket, company representatives said.

It's unclear when the next SES-9 launch attempt will be.

"We don't have another launch date planned at the moment," Falcon 9 product director John Insprucker said during the launch webcast today.

"We're going to have to continue to evaluate the first-stage telemetry that we have," he added. "The Falcon 9 is safe; the vehicle went through a standard recovery sequence that we've used many times."

The Falcon 9 will deliver SES-9 to geostationary transfer orbit for SpaceX customer SES, a company based in Luxembourg. The rocket-landing attempt is a secondary objective; it is part of SpaceX's effort to develop fully and rapidly reusable launch vehicles, a key priority for Musk and the company.

SpaceX has tried drone-ship landings three times before — in January 2015, April 2015 and January 2016. Each time, the Falcon 9 first stage hit its target but ended up falling over and exploding on the ship's deck.

A Falcon 9 has landed successfully on terra firma; SpaceX pulled off this milestone in December 2015 at Cape Canaveral.