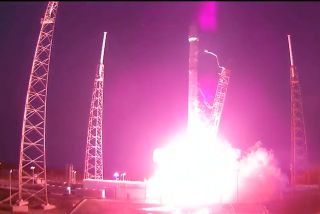 After a series of delays, a SpaceX rocket soared into space to successfully deliver a commercial satellite into orbit, but couldn't quite manage to stick the landing during an audacious attempt to touch down on a drone ship at sea.

SpaceX's Falcon 9 rocket blasted off in a brilliant launch from Florida's Cape Canaveral Air Force Station tonight, March 4, at 6:35 p.m. EST (2335 GMT). Its mission: Deliver the SES-9 commerical communications satellite into orbit for its Luxembourg-based customer SES. That part went fine, with the SES-9 satellite separating as planned from the Falcon 9 rocket and heading off toward its final orbit. The rocket landing, however, was not successful.

"Rocket landed hard on the droneship," SpaceX CEO Elon Musk wrote in a Twitter update. "Didn't expect this one to work ([very] hot reentry), but next flight has a good chance."

SpaceX tried to land the first stage of its Falcon 9 rocket on "Of Course I Still Love You," one of two "autonomous spaceport drone ships" owned by the company, as part of a bold experiment for resuable rocket technology. The company publicly stated that the chances of success were slim, but it hoped to try anyway.

About 2.5 minutes after liftoff, the first stage of the Falcon 9 separated from its upper stage, then performed two engine burns to return Earth for a landing in the Atlantic Ocean a few hundred miles off the Florida coast. A video feed from the drone ship offered a tantalizing glimpse of what appeared to be the Falcon 9 approaching its landing zone before cutting out, apparently just before the booster hit the ship's deck. [See photos of the SpaceX rocket launch and landing try here]

On three previous occasions — in January 2015, April 2015 and January 2016 — a Falcon 9 first stage had gotten this far during an ocean landing try. But all three times, the booster ended up toppling over on the ship's deck and exploding.

Less than three months ago, in December 2015, SpaceX managed to land a Falcon 9 first stage on terra firma at Cape Canaveral, marking the first time this had ever been done during an orbital launch. (Blue Origin, the private spaceflight company established by Amazon.com founder Jeff Bezos, landed its New Shepard launch vehicle in November, but that milestone occurred during a suborbital test flight.)

All of this work is part of the company's effort to develop fully and rapidly reusable rockets — a key priority for SpaceX and Musk. [Inside SpaceX's Epic Fly-Back Reusable Rocket Landing (Infographic)]

Musk has said repeatedly that he set up SpaceX primarily to help humanity colonize Mars, and he thinks reusable rockets are key to making that happen. The technology could slash the cost of spaceflight by a factor of 100, Musk has said.

The booster stage that landed in December survived its flight in good shape, and it performed well in engine tests after its recovery, SpaceX representatives said last month. That particular rocket stage will probably end up on display somewhere, but the company aims to refly other landed boosters in the future.

While the rocket landing attempt drew much of the attention for today's launch, the mission's main purpose was to get the SES-9 satellite aloft for SES.

"SES-9 will provide expansion and replacement capacity to serve the video, enterprise, mobility and government sectors in fast-growing markets across Northeast Asia, South Asia and Indonesia," SpaceX representatives wrote in a mission description.

"The additional capacity on SES-9 will enable direct-to-home operators to broadcast more local content and increase their SD and HDTV channel lineup to 22 million households across Asia-Pacific, in markets such as India, Indonesia and the Philippines," they added.

Today's liftoff and landing attempt were delayed multiple times. Launch tries on Feb. 24 and Feb. 25 were scrubbed because of issues with the loading of liquid-oxygen propellant onto the Falcon 9, and an attempt on Feb. 28 was aborted just before liftoff, apparently because of rising oxygen temperatures. (This temperature rise was partly attributable to a 35-minute delay caused by a boat in the launch's "keep-out zone," according to Musk).

SpaceX had intended to try again Tuesday (March 1), but ended up pushing the launch to today because of concerns about high-altitude winds.