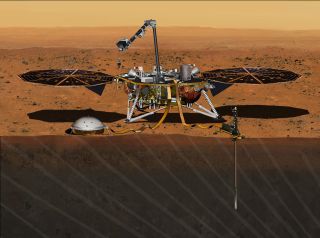 An artist's illustration of NASA's InSight Mars Lander on the Red Planet’s surface, which will not be ready to launch as planned in March 2016 because of a leak in the vacuum chamber surrounding one of its key instruments.
(Image: © NASA/JPL-Caltech)

NASA will decide soon whether a Mars lander that was supposed to launch next month will ever get off the ground.

NASA announced in December that its InSight lander, which is designed to probe the interior structure of Mars, would not be ready to blast off in March as originally planned because of a leak in the vacuum container surrounding one its key instruments.

Favorable alignments of Earth and Mars come along just once every 26 months, so NASA could aim to send InSight on its way in mid-2018. But it's also possible that the mission will be scrapped altogether, agency officials have said. [Photos: NASA's Mars InSight Mission to Probe Red Planet's Core]

"We are still assessing InSight," NASA chief financial officer David Radzanowski said during a news conference Tuesday (Feb. 9) about the space agency's budget request for fiscal year 2017. "We are making a decision in the March timeframe as to whether we will continue support to InSight for the next launch opportunity in 2018, or go some other route."

InSight carries two main science instruments — a suite of three seismometers known as the Seismic Experiment for Interior Structure (SEIS) and the Heat Flow and Physical Properties Package, a heat probe designed to hammer itself 16.5 feet (5 meters) down into the Martian dirt.

The problem lies with the spherical vacuum chamber surrounding SEIS, which is provided by the French national space agency, known as CNES. This chamber was found to be leaking slightly because of a defective weld. The issue should be fixed in plenty of time for a potential 2018 launch, CNES officials said in December.

InSight — whose name is short for Interior Exploration using Seismic Investigations, Geodesy and Heat Transport — has a total cost cap of $675 million, $525 million of which has already been spent. NASA will need to determine whether or not InSight can still launch in mid-2018 while staying under the $675 million limit, agency officials said in December.

If InSight gets off the ground, the lander's observations should reveal a great deal about the Martian interior, including the size of the planet's core. This information should in turn shed light on the formation and evolution of rocky planets in general, NASA officials have said.

InSight was originally supposed to launch on March 18 from Vandenberg Air Force Base in California. No NASA planetary missions have ever launched from Vandenberg; they generally blast off from Florida's Cape Canaveral Air Force Station.