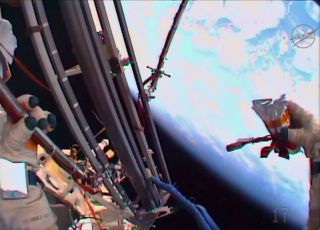 Cosmonaut Sergey Volkov hangs onto the outside of the International Space Station as he prepares to throw a flash drive into space Feb. 3. The flash drive contains video and messages from a celebration of the 70th anniversary of Russian Victory Day last year.
(Image: © NASA TV )

Two cosmonauts completed a spacewalk today to retrieve, install and adjust experiments clinging to the outside of the International Space Station and to jettison a ceremonial flash drive into space.

Sergey Volkov and Yuri Malenchenko of the Russian federal space agency, known as Roscosmos, ventured outside the station today (Feb. 3) for a quicker-than-planned spacewalk of 4 hours and 45 minutes. The cosmonauts were assisted from inside the station by NASA astronaut Tim Kopra and British astronaut Tim Peake, who went on their own spacewalk in mid-January (which was cut short when Kopra noticed water in his helmet).

The mission was Volkov's fourth spacewalk and mission commander Malenchenko's sixth — his first was almost 22 years ago, when Malenchenko was aboard Russia's Mir space station. Both of the spacewalkers are Soyuz pilots — they piloted the spacecraft that initially brought them to the station, three months apart. Their primary tasks on the spacewalk focused on maintaining many of the experiments arrayed outside the space station and checking for wear and tear. [The International Space Station: Inside and Out (Infographic)]

When the spacewalk began, Volkov exited the space station first to complete an unusual task added to the to-do list just a few days ago: throwing into space a small flash drive that was used in a celebration of the 70th anniversary of Russian Victory Day on May 9, 2015. (Victory Day marks Nazi Germany's capitulation to the Soviet Union at the end of World War II.) The flash drive carries messages and video from last year's celebration.

To give the flash drive enough mass to be successfully thrown from the station, the cosmonauts attached it to an empty film canister filled with disposable towels. Volkov propelled the whole bundle into a retrograde orbit — the opposite direction to that of the space station — where it will not get in the station's way before spiraling down to burn up in Earth's atmosphere within a few weeks. Malenchenko filmed the flash drive's flight with a GoPro camera.

After that, the duo worked on several experiments on the outside of the space station, including bringing in the European Space Agency's EXPOSE-R Experiment, which was at the end of its 7-year run. EXPOSE-R housed biological and biochemical samples that were switched out over time to evaluate how they responded to space exposure. Along the same lines, they replaced a cassette container on another experiment that tests how materials are degraded in space over time.

The spacewalkers also took samples from the outside of the International Space Station to check for thruster residue and captured detailed images of the Russian segment's exterior.

The two cosmonauts' final tasks included installing two devices called gap spanners, which will help crewmembers move around the space station's Russian segment on future spacewalks. They also waited until daylight to test a device that can apply a protective thermal control film to the outside of the space station. The film jammed as they tried to apply it to the sample board, so they spent some time trying to un-jam the applicator, racing to finish before night fell over the space station.

As the two came in, Kopra and Peake assisted while U.S. astronaut Scott Kelly and Russian cosmonaut Mikhail Kornienko isolated themselves in a module of the Russian segment in case of any re-pressurization issues — a standard safety measure. Kelly and Kornienko are on Day 313 of their 340-day stay in space. In less than four weeks, the two will return to Earth along with Volkov.