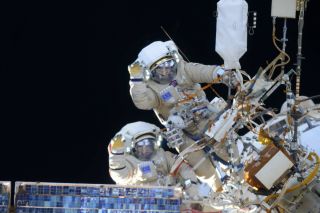 Russian cosmonauts Gennady Padalka and Mikhail Kornienko wave during a spacewalk outside the International Space Station on Aug. 10, 2015.
(Image: © Roscosmos (via Facebook))

Two cosmonauts are venturing outside the International Space Station for a 5.5-hour spacewalk this morning, and you can watch all the action live.

Yuri Malenchenko and Sergey Volkov of the Russian federal space agency, which is called Roscosmos, will exit the orbiting lab at around 8:10 a.m. EST (1310 GMT) today (Feb. 3). You can watch the extravehicular activity (EVA) live here at Space.com beginning at 7:30 a.m. EST (1230 GMT), courtesy of NASA TV.

The cosmonauts will perform a variety of tasks during the spacewalk. For example, the duo will retrieve the European Space Agency's EXPOSE-R Experiment, a set of biological and biochemical samples that have endured the harsh conditions of space, NASA officials said.

"Malenchenko and Volkov also will install the Vinoslivost experiment, which will test the effects of the space environment on various structural material samples, and test a device called the Restavratsiya experiment, which could be used to glue special coatings to external surfaces of the station’s Russian segment," NASA officials wrote Friday (Jan. 29) in a preview of the spacewalk.

Wednesday's EVA comes less than three weeks after a spacewalk involving NASA astronaut Tim Kopra and British spaceflyer Tim Peake had to be aborted due to water buildup in Kopra's helmet.

The Jan. 15 water leak, which NASA is still investigating, was reminiscent of an incident involving Italian astronaut Luca Parmitano in July 2013, but was not as dramatic or as frightening as that earlier case. Parmitano reported that water obscured his vision and covered his nose during his July 2013 spacewalk, whereas Kopra dealt with a much smaller amount of liquid.