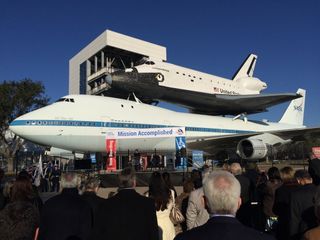 Former astronaut Ron Garan lives by the motto "The key is 'we,'" which refers to the idea that people should try to work together, beyond national borders, to solve major world problems, such as providing adequate food and clean water for the world's population and stopping environmental destruction. In his book "The Orbital Perspective," Garan says it was his time in space — and in particular, the view of Earth from above — that inspired this mission.

Very few people will ever get to see the view that so deeply moved Garan, and which so many other astronauts have said is life-changing. Of course there are pictures — thanks to cellphone cameras and the Internet there are hundreds of pictures taken by astronauts during flight, and hundreds more of rocket launches and views of the cosmos captured by NASA's many observatories.

But it is rare that average citizens get to see, in person, the awesomeness of NASA's capabilities. That's one of the reasons that the new exhibit at Space Center Houston, featuring the Boeing 747 jetliner that ferried the space shuttles to and fro across the United States, is so important. [747-Space Shuttle Exhibit Launches in Houston]

On Saturday (Jan. 23), the Space Center (which is right next door to the Johnson Space Center, home of NASA's mission control), held a grand-opening ceremony for its newest exhibit, called Independence Plaza, where visitors can walk inside the modified jetliner known as NASA 905, as well as a replica of the shuttle. Seeing the enormous spacecraft duo in person is at once awe-inspiring; getting to tour inside them both adds another thrill to the experience.

The first thing most people notice when they approach the exhibit — the thing they exclaim, over and over — is just how enormous these two vehicles are. With the space shuttle replica stacked on top of the aircraft, the pair of them stand eight stories tall, reaching higher than most of the Space Center building.

The 747 is 231 feet long (70 meters) with a wingspan of 211 feet (64 meters). It's tail number, N905NA earned it the nickname "NASA 905," and it is the largest preserved artifact from NASA's shuttle program. While many people have flown on airplanes, passengers typically enter from the confined safety of a jet bridge. But at Space Center Houston, the open stairway leading to the airplane lets visitors step right up to this giant metal bird, even touch the exterior, and see its full scale.

The pairing also highlights the immense size of the shuttle. The angular, black-and-white frame is perched proudly on top of the airplane, balancing with amazing grace on the few struts that connect it to the aircraft. It's an arrangement unlike anything that had ever flown before, but the vehicles look totally natural in this state.

Inside the replica shuttle (which has been named "Independence") are two separate levels – the upper deck displays the cockpit and part of the crew quarters; the lower level lets visitors walk into the cargo bay, which holds the actual cradle used to hold an Intelsat satellite on the space shuttle Endeavour in 1992.  The feeling of awe at the shuttle's size is contrasted by an intimacy at seeing photographs of the people who flew it, and the small space where as many as seven crewmembers would live for weeks at a time.

Inside the aircraft, only a few passenger seats are left. The plane was stripped when NASA purchased it, both because the seats were no longer needed, and because the engineers wanted to remove excess weight. They even removed a rather stylish 1970s lounge in the area behind the cockpit.

The once-bare interior is now home to a gorgeous exhibit that pays homage to NASA engineer John Kiker, who dreamed up the aircraft-shuttle pairing. By the time it was retired, the NASA 905 had completed 233 shuttle ferry flights.

There are interactive displays that demonstrate some of the challenges of mounting and flying the duo, such as how to balance the added weight of the shuttle while also dealing with its additional upward lift (the shuttle could glide through the atmosphere, but not propel itself). Structural reinforcements were added in the two places where the weight of the shuttle would come down on the airplane body. For the exhibit, the plane first had to be dismantled and rebuilt. Then, most of the interior of the plane had to be sprayed with insulation so it could include air conditioning in the blistering Houston summers, but one section of the original siding, where some of those additional supports were added, was left untouched.

The 905 is unique because it is both an artifact (which the Center would like to preserve) and an exhibit space (a place that typically endures a lot of wear and tear). This balance occasionally caused some distress for Paul Spana, the exhibits manager at Space Center Houston. Most of the other artifacts on display at Space Center Houston (and there are many) are positioned such that visitors can't touch them or get inside them: a real space shuttle control panel is visible behind Plexiglas; the Gemini 5 spacecraft dangles in a diorama that makes it look as though it were flying through space. One exception is the Skylab training module, which is large enough for visitors to walk through, but on a fenced walkway.

A symbol of greatness

In a speech during the opening ceremony for Independence Plaza, Fred Griffin, chairman of the board of the nonprofit organization that owns and operates the space center, said he hoped that the image of the iconic duo would come to represent Houston: an international symbol on par with the Statue of Liberty or the Sydney Opera House.

Of course, NASA didn't built the 747 – it was purchased from American Airlines in the 1970s. But its imposing size and association with the shuttle program make it an apt symbol for NASA's work. Seeing the majesty of this arrangement is one chance for the public to get a glimpse of a real NASA artifact that captures the majesty of the organization.

There are a few comparably large lawn ornaments at other space centers — there are three Saturn V rockets on display at various NASA centers; the twin solid-rocket booster on display at Kennedy Space Center; and the space shuttle and rocket replica at the U.S. Space Camp in Huntsville, Alabama.

But members of the public can't climb inside those exhibits the way they can walk into the NASA 905. It may have been difficult for Spana to balance preservation of the plane with the creation of a welcoming exhibit space, but the effort paid off. The size of the exhibit hits visitors with an initial wave of awe and wonder, but stepping inside it creates a feeling of intimacy with the people who were part of this incredible endeavor. The exhibit inside the aircraft is a place where a person can slowly absorb the reality of what this giant machine accomplished. It's a chance not only to observe NASA history, but to steep in it. It's important that such experiences be available to the  public, as a physical connection to the pursuit of spaceflight.