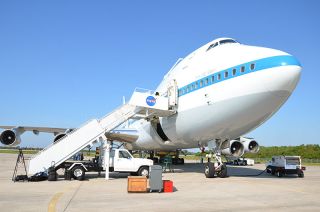 Now an iconic craft in its own right, with more than 800 flights in service to NASA, the original of two SCAs will embark on the first of its final ferry flights next week. Known as NASA 905, referring to its tail number, the 747 will deliver space shuttle Discovery to Washington, D.C. on April 17 for public display by the Smithsonian's National Air and Space Museum.

That ferry flight will be followed a week later by another, carrying the jet's original passenger, the test orbiter Enterprise, to New York for the Intrepid Sea, Air and Space Museum. Finally, this fall, NASA 905 will bring shuttle Endeavour to Los Angeles for the spacecraft's exhibition at the California Science Center.

"This is a series of deliveries starting now all the way through September, and they are a little bit bittersweet because we've been doing this for a while," SCA captain Jeff Moultrie said. "We get to fly the airplane every three weeks and that's going away. That, combined with the fact that the shuttle program itself is going away — and [the SCA] was a big part of it — this is sort of special to us."

On Wednesday (April 11), NASA provided the media — including collectSPACE.com — the opportunity to tour NASA 905 at the Kennedy Space Center in Florida before Discovery was mated with the aircraft. [Gallery: Tour NASA’s Shuttle Carrier Aircraft]

Purchased by NASA from the airline in 1974 for $15,601,192.19, NASA 905 was modified by Boeing to first carry the prototype Enterprise for approach and landing tests and then later to ferry the space-worthy orbiters on transcontinental flights between their landing and launch sites.

Three struts protruding from the top of the jet's fuselage were added to mount the shuttle and two vertical stabilizers were installed on its tail to steady the air- and space-craft combo in flight.

All of the jet's interior furnishings and equipment located to the rear of its forward doors were removed and additional instrumentation was added to enable the crew to be able to monitor the electrical loads while the aircraft was ferrying a shuttle.

The final exterior traces of its American Airlines' history — its red, blue and silver livery — were replaced in 1983 when NASA repainted the jet to its current white and blue before flying it to the Paris Air Show in France.

Inside, the jet still retains some of its original first class furnishings, its carpeting, and its commode for the flight crew. The cockpit is still equipped with its original analog displays and dials as well.

Historic sight, but not from space

But it is not the SCA's appearance that establishes and reemphasizes its history — it's the jet's piggyback passengers, and in particular the original, Enterprise.

Regardless if it is Enterprise, Endeavour, or Discovery, the sight of a 122-foot (38-meter) long orbiter sitting atop the 231-foot (70-meter) Shuttle Carrier Aircraft will be an historic sight for those looking up from the ground. But for the few who are able to look down from the shuttles' former realm, Earth orbit, the jumbo jet will unfortunately be too small to see.

"At 400 kilometers [248 miles], there is actually relatively little opportunity to see anything even as large as the Shuttle Carrier Aircraft with Discovery mated to it," Expedition 30 commander Dan Burbank said from aboard the International Space Station on Wednesday (April 11). "We are able to see the evidence of ships and planes in the form of wakes and contrails if the lighting is just right but it is really difficult to get the kind of resolution to see much beyond that."

Editor's Note: If you snap a photo of Discovery flying over Washington on its way to the Smithsonian, and would like to share it with SPACE.com for a possible story or gallery, please contact managing editor Tariq Malik at tmalik-at-space.com.