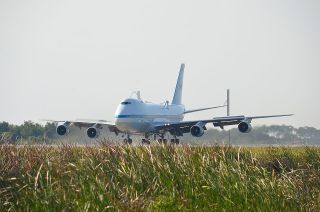 The modified-Boeing 747, known as the Shuttle Carrier Aircraft (SCA), touched down at NASA's Kennedy Space Center here Tuesday (April 10). The jumbo jetliner came in from Dryden Flight Research Center in California to ferry Discovery to the Smithsonian in Washington, D.C., where the iconic spacecraft is set to go on public display.

In the year since, technicians have prepared the shuttle Discovery for its exhibit at the National Air and Space Museum's Steven F. Udvar-Hazy Center in Virginia. The orbiter's hazardous materials were removed and some components, such as its three main engines, were replaced with replicas so they could be kept for possible future reuse.

On Saturday, (April 14), shuttle technicians will use a steel gantry-like structure called the Mate-Demate Device to hoist Discovery and secure it atop the 747 SCA. Weather permitting, the paired air- and space-craft will leave for Washington Dulles International Airport on the morning of April 17. [Photos: Inside Shuttle Discovery, Reporter's-Eye View]

The SCA will take to the air on what will be its 806th flight in service to NASA — 218 with a shuttle on its back, and 38th trip carrying Discovery — and fly south. Weather permitting, spectators at the Kennedy Space Center Visitor Complex and along Cocoa Beach will get a clear view of the piggyback orbiter before the flight continues on up the Eastern Seaboard.

The exact flight plan is weather contingent, but once over the nation's capital, the SCA will fly Discovery about 1,500 feet above various parts of Washington.

"The aircraft is expected to fly near a variety of landmarks in the metropolitan area," NASA said on April 9, "including the National Mall, Reagan National Airport, National Harbor and the Smithsonian Udvar-Hazy Center. When the flyover is complete, the SCA [with Discovery] will land at Dulles International Airport."

In addition to spotting the shuttle as it flies overhead, the museum has invited the public to view the final approach from the parking lot of the Udvar-Hazy Center. Then two days later on April 19, the public is invited to return for an arrival ceremony, which will kick off a four-day "Welcome Discovery" festival.

The SCA will not be returning to Florida after dropping off Discovery.

Instead, another shuttle, the prototype Enterprise, will be loaded atop of the 747 at Dulles Airport for its own flight to New York the following week. While Enterprise never flew in space, it was the first to fly on a Shuttle Carrier Aircraft for a series of approach and landing tests in the 1970s.

Since 2003, Enterprise has been on public display at the Udvar-Hazy Center. It is being moved to the Intrepid Sea, Air and Space Museum, a converted aircraft carrier that is berthed in Manhattan, to make room for Discovery.

Weather permitting, the SCA will take off with Enterprise on April 23, flying to John F. Kennedy (JFK) International Airport. NASA and the Intrepid have yet to release details about sighting opportunities or planned flybys.

After delivering Enterprise, the SCA will return to Florida to wait for its final mission: flying space shuttle Endeavour to Los Angeles this September.