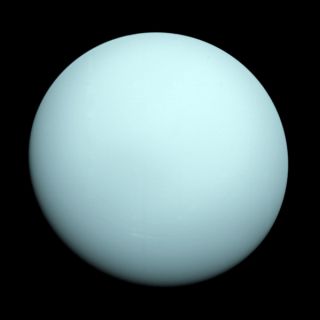 Arriving at Uranus in 1986, Voyager 2 observed a bluish orb with extremely subtle features. A haze layer hid most of the planet's cloud features from view.
(Image: © NASA/JPL-Caltech)

Humanity got its first up-close look at an exotic, pale-blue world 30 years ago this week.

On Jan. 24, 1986 — just four days before the space shuttle Challenger exploded during liftoff, killing all seven astronauts aboard — NASA's robotic Voyager 2 probe zoomed by Uranus, the seventh planet from the sun.

The close encounter was brief — Voyager 2 collected data for just 5.5 hours during the flyby, which brought the probe within 50,600 miles (81,500 kilometers) of the "ice giant" — but extremely productive. [Photos of Uranus, the Tilted Planet]

For example, from Voyager 2's data, mission scientists determined that Uranus is colder than the other seven officially recognized planets — a surprise, given that Uranus is closer to the sun than Neptune is. (The reason: Uranus apparently has no internal heat source, NASA officials said.)

Voyager 2 data also revealed that Uranus' atmosphere is 85 percent hydrogen and 15 percent helium. The probe additionally spotted evidence of a boiling ocean about 500 miles (800 km) below the planet's cloud tops, and a weirdly tilted magnetic field not aligned with the planet's rotational axis.

"We knew Uranus would be different because it's tipped on its side, and we expected surprises," Voyager project scientist Ed Stone, of the California Institute of Technology in Pasadena, said in a statement.

During its 1986 flyby, Voyager 2 found two new rings around Uranus, and 10 new moons. (The planet has 27 known satellites.) Among the latter is a bizarre moon called Miranda, which has a patchwork landscape and huge canyons that could be up to 12 times as deep as Arizona's Grand Canyon.

Voyager 2 launched on Aug. 20, 1977, about two weeks before its twin, Voyager 1. Voyager 1 got up-close looks at Jupiter and Saturn, but Voyager 2 took advantage of a rare alignment to visit all four big planets in the outer solar system: Jupiter, Saturn, Uranus and Neptune.

Voyager 2 is the only probe ever to see Uranus up close, but more discoveries about the ice giant — which is about four times wider than Earth — keep coming, thanks to telescope observations. For example, scientists using the Keck II telescope in Hawaii saw weather activity on Uranus ramp up in August 2014, seven years after the planet's closest approach to the sun. The reasons for this puzzling delay are still being investigated.

Voyager 2 is still sailing outward through the solar system, and still communicating with its handlers on Earth. The spacecraft is expected to reach interstellar space in the next few years, just as Voyager 1 did in August 2012.

Voyager 2 is currently 111 astronomical units (AU) from Earth, while Voyager 1 is 134.4 AU from its home planet. (One AU is the average distance from Earth to the sun, about 93 million miles, or 150 million km.)