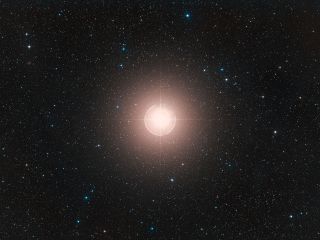 A direct-sky image of Betelgeuse, a star that is shedding its mass as it nears the end of its life.
(Image: © ESO/Digitized Sky Survey 2. Acknowledgment: Davide De Martin.)

The bright, red star Betelgeuse, in the constellation Orion, has entered the twilight of its life. Like many stars of a similar size that reach the end of the road, Betelgeuse is slowly shedding its mortal coil — by ejecting much of its mass out into space.

This phase of star death is extremely common in the universe — in about 5 billion years, when the sun starts to die, it too will become a "red giant." It will shed much of its mass and  swell to such an enormous size that it will engulf Mercury, Venus and Earth. But new observations of Betelgeuse show that scientists still can't explain what causes a red giant's massive expulsion of matter.

"In the next million years, if Betelgeuse lives that long, it is going to shed about a quarter of its current mass, and the problem is we don't understand the basic physics of how that happens," said Graham Harper, an astrophysicist and senior research associate at the University of Colorado, Boulder. "This is a big astrophysical problem."  [The Brightest Stars in the Sky: A Starry Countdown]

Earlier this month, at the 227th meeting of the American Astronomical Society (AAS), Harper presented new observations of Betelgeuse that appear to further complicate the story of how these red giant and supergiant stars shed so much mass.

The findings show that the gas moving away from the star is much colder than expected, and so far, scientists can't come up with a mechanism that can eject so much mass from the star, but also generate so little heat. It's a problem of balancing energy in and energy out and right now the accounting doesn't add up.

NASA's SOFIA instrument is neither a space-based telescope nor a ground-based one. Instead, it's on an airplane.

An observatory that can fly at 45,000 feet has some advantages over ground- and space-based telescopes. At that altitude, SOFIA can get almost entirely above the Earth's atmosphere, which is helpful because studying the cosmos through those protective layers can be like looking through a pair of glasses with the wrong prescription, or a windshield battered by rain. (This distortion may not be obvious to the human eye, but it does arise at the level of precision sought by astronomers).

The distortion is particularly bad when studying infrared light, which is what Harper and colleagues wanted to collect from Betelgeuse's outer layers (the star has now swelled to the point that if it were placed in Earth's solar system, it would extend to the orbit of Jupiter, according to NASA). There's no space-based observatory that gathers the specific wavelengths of light they were after, and gathering data with SOFIA was not only faster but significantly cheaper than launching something into space. Plus, scientists can strap new equipment onboard SOFIA with every flight.

So that's exactly what Graham and his colleagues did — they fitted a custom-made detector onto SOFIA to look at Betelgeuse in a way that had never been done before, and their results were immediately surprising.

Back in the 1980s, according to Harper, scientists came up with an explanation for what caused red giants, as well as red supergiants like Betelgeuse, to shed their mass The theory posited that the energy was created largely by magnetic fields shoving the electrically charged gas (called plasma) out into space. Magnetic field activity in the sun can set off massive explosions, and move around the glowing-hot material on the surface.

The red supergiant theory drew on what scientists know about magnetic fields in the sun, Harper said. With the theory in place, "Everyone got a little bit comfortable," Graham said.

That ended in 1997, when a group of scientists decided to scrutinize Betelgeuse using the Very Large Array (VLA), a massive radio observatory in New Mexico. The new high-resolution observations allowed the researchers to peer into the layers of material coming off Betelgeuse, and measure the temperature therein. They found it to be only about one-third of what the magnetic field model predicted it should be.

Heat is a common byproduct whenever energy is exchanged ­– consider how friction can make your hands warm when rubbed together, or how a computer heats up while it is on. When objects collide, they can also generate heat. The magnetic field theory of red supergiants predicted that the energy pushing the gas outward would also warm it up, but the observations showed that wasn't the case.

"The basic underlying physics was way off," Graham said. "If you're going to throw out and eject matter, you need to put energy in — and that energy is not heating the plasma at all."

Harper and his colleagues are hunting for answers to the red supergiant problem. But their most recent observations of Betelgeuse with SOFIA — along with some supplemental data from the NASA Infrared Telescope Facility (IRTF) on Mauna Kea in Hawaii — only seem to complicate the problem further. Their infrared detector aboard SOFIA observed even cooler temperatures than those found in the VLA study. They "[go] way below what we already thought was cold," Graham said. The finding agrees with the VLA observations that "there is much less hot material than we ever would have expected," based on the magnetic field model.

"Magnetic fields are very plausible but we don't know how to make them behave to get the right answer," Harper said, referring to scientists' current inability to come up with a model that matches the observations.

So what mechanism could put so much energy into the material but not heat it?

In addition to magnetic fields, the explanation could be shockwaves, or great releases of plasma ejected from inside the star. All of these things could add up to explain what scientists are observing.

"So it might be it's a combination of all sorts of things and it's just somehow fooling us in a very bad way," Harper said.

He also cautioned that the results from the SOFIA flight have not yet been repeated. The team is planning another flight for this year to verify their initial result. Once the findings are verified and published, they'll be tossed to the handful of theoreticians grappling with his problem and trying to come up with a solution (and Harper said there are some theoreticians working very hard on this problem).

There are other ways that scientists can try to crack this problem, including studying another nearby red supergiant, Antares. In addition, Harper said he and his would like to observe Betelgeuse and Antares using the Atacama Large Millimeter/submillimeter Array (ALMA), in Chile. While ground-based, ALMA is located 16,400 feet (5,000 meters) above sea level, where it can avoid many of the distorting effects of the atmosphere. When the observatory is operating with the full power of its 66 antennas, ALMA will allow astronomers to peer deeper into Betelgeuse's layers, closer to the surface of the star, where they may find clues about what's driving the star's shedding, Harper said.

"As a physicist, I'm really interested in trying to fundamentally understand this so we can apply it to many other objects," Harper said.

At some point in the next million years, Betelgeuse is expected to follow the path of many red supergiants before, it and explode into a supernova. From Earth, it may appear as bright in the night sky as the full moon. This stellar explosion could take place tomorrow, but with any luck, scientists will have enough time before Betelgeuse explodes to solve the curious case of the cool red supergiants.