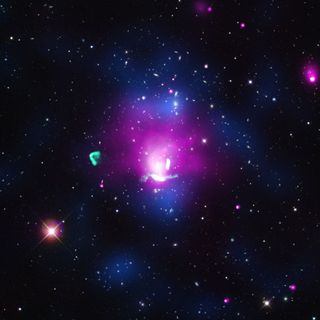 Astronomers have found evidence that a collision between two galaxy clusters sent shock waves through a once brightly radiating cloud of electrons, bringing the cloud back to life.

Scientists are referring to the resurrected cloud as a "radio phoenix," named after the mythical bird that is reborn from its ashes, because the high-energy electrons within it are once again radiating mostly at radio frequencies, according to a statement from NASA. The cloud is found in Abell 1033, a galaxy cluster of more than 350 galaxies about 1.6 million light-years from Earth.

The above video shows new images of Abell 1033 created using light collected by NASA's Chandra X-ray Observatory, radio emissions collected by the Very Large Array, and optical light from the Sloan Digital Sky Survey. Combining data from these telescopes, as well as the Westerbork Synthesis Radio Telescope in the Netherlands, astronomers were able to figure out what brought the radio phoenix back to life. [Watch: 'Radio Phoenix' Rises From Galaxy Cluster Crash]

Astronomers working on the project believe the supermassive black hole that sits near Abell 1033's center erupted long ago, releasing a stream of high-energy electrons (subatomic particles that make up atoms) that formed a cloud hundreds of thousands of light-years wide and radiating radio emissions. As the electrons gradually lost energy over millions of years, the cloud's emissions began to fade, the NASA statement said.

Galaxy clusters can consist of hundreds or even thousands of individual galaxies, as well as dark matter, and huge reservoirs of hot gas, the NASA statement said. As the electron cloud  in Abell 1033 grew dimmer, another cluster of galaxies slammed into the original cluster, sending shock waves through the system.

These shock waves, similar to sonic booms produced by supersonic jets, passed through the dormant cloud of particles, compressed the cloud and re-energized the electrons, essentially waking them up. The now wide-awake electrons once again radiated radio frequencies — the phoenix had risen from the ashes.

The image of Abel 1033 shows X-rays from Chandra in pink and radio data from the VLA in green. Background imagery comes from observations from the SDSS and a map of the density of galaxies, made from the analysis of optical data, is seen in blue.

Astronomers believe this image shows the radio phoenix soon after it was resurrected, because these types of radio sources fade "very quickly" (on a cosmic scale) when located close to the center of a galaxy cluster, the NASA statement said. Because of the intense density, pressure and magnetic fields near the center of Abell 1033, scientists expect the radio phoenix to radiate for tens of millions of years.