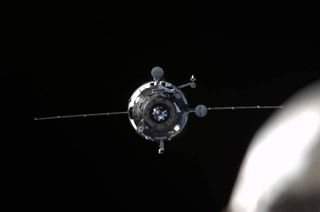 A robotic Russian cargo ship made it to the International Space Station just in time for Christmas.

Russia's uncrewed Progress 62 freighter docked with an Earth-facing port on the orbiting lab today (Dec. 23) at 5:27 a.m. EST (1027 GMT), two days after blasting off atop a Soyuz rocket from Baikonur Cosmodrome in Kazakhstan.

The six astronauts currently living aboard the space station will soon begin unloading the 2.8 tons (2.5 metric tons) of supplies that Progress 62 carried to space. The cargo ship will remain attached to the orbiting lab for about six months, and then will be loaded up with trash and sent off to burn up in Earth's atmosphere. [Cosmic Quiz: Do You Know the International Space Station?]

The Progress is one of four different robotic vehicles that currently ferry supplies up to the space station. The other three are Japan's H-II Transfer Vehicle (HTV) and the Cygnus and Dragon spacecraft, which were developed by the American spaceflight companies Orbital ATK and SpaceX, respectively.

Orbital ATK holds a $1.9 billion deal to make eight flights to the station for NASA using Cygnus and the company's Antares rocket. SpaceX signed a similar contract that pays the company $1.6 billion to complete at least 12 missions using Dragon and SpaceX's Falcon 9 rocket.

The Progress, HTV and Cygnus vehicles are all expendable, but Dragon is designed to survive re-entry and can therefore bring cargo down from the orbiting lab.

Three of these four freighters suffered mission failures in the past 14 months. In October 2014, Orbital ATK's third contracted resupply flight ended just seconds after liftoff when the Antares exploded. The Cygnus made a successful return-to-flight mission earlier this month, delivering more than 7,000 lbs. (3,175 kilograms) of supplies to the station on Dec. 9. (That mission blasted off with the aid of a United Launch Alliance Atlas V rocket; Orbital ATK is revamping Antares and will use Atlas V boosters until the new Antares is ready.)

The Progress 59 mission experienced serious problems shortly after its launch on April 28, 2015, and never attempted to dock with the station. And SpaceX's seventh cargo run failed less than 3 minutes after launch on June 28, when the Falcon 9 broke apart, apparently because of a faulty steel strut in the rocket's upper stage.

SpaceX has already developed a modified version of the Falcon 9, which launched Monday (Dec. 21) carrying 11 spacecraft for the satellite-communications company Orbcomm. That flight also featured the successful landing of the rocket's first stage back on Earth, marking a milestone in the development of reusable-rocket technology.

SpaceX aims to launch its next cargo mission to the space station next month.