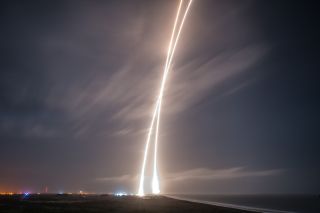 This long exposure captures the launch into orbit of SpaceX's Falcon 9 rocket, and the booster's first stage return to a smooth landing at Cape Canaveral Air Force Station on Dec. 21, 2015.
(Image: © SpaceX)

SpaceX, your Falcon 9 rocket has landed, and oh, what a sight it was.

In a history-making launch late Monday (Dec. 21), the private spaceflight company SpaceX blasted one of its two-stage Falcon 9 rockets into space, then returned the first stage of the rocket back to Earth in a stunning nighttime landing. (The upper stage, meanwhile, delivered 11 satellites to orbit for SpaceX customer Orbcomm.) The feat was so awesome we made a greatest hits video of the SpaceX rocket landing here, but SpaceX itself captured the view with some amazing images.

"I ran out on the causeway just to watch the landing, and the sonic boom reached me just as the rocket touched down, so I thought at first the rocket exploded," Musk told reporters in a teleconference after the landing. "Then I went back into launch control and saw this amazing video of the rocket on the pad … I can't quite believe it."

Yet believe it Musk must, because SpaceX accomplished the rocket landing during a live webcast. And shortly after the flight, the Hawthorne, California-based company released amazing photos showing the Falcon 9 rocket as it landed.

One stunning view captures the rocket just before touchdown, one of its nine engines spitting a golden spike of fire. Another shows the booster after touchdown, its mission accomplished.

Two other images, both long-exposure views, capture the rocket launch and landing in different ways. One shows the launch, as well as the descent and landing burns of the returning Falcon 9, as arcs of light. Another depicts the two events as a pair of brilliant streaks, one for the rocket's departure and another for its return.

SpaceX launched the Falcon 9 rocket at 8:29 p.m. EST (0129 GMT) from a pad at Florida's Cape Canaveral Air Force Station, lighting up the night sky with a dazzling liftoff. The two-stage rocket carried 11 communications satellites for SpaceX's customer Orbcomm. Putting those satellites in orbit was the primary goal of the flight. The rocket landing, while awesome, was a sort of spaceflight gravy.

"I wasn't at all confident that this would succeed, but I'm glad that it did," Musk said.

Returning a Falcon 9 rocket from space after a successful launch has been a major goal for Musk and SpaceX since the company's founding in 2002. Musk said a viable reusable rocket could dramatically lower the cost of spaceflight, and make his goal of building a city on Mars actually achievable.

"The Falcon 9 rocket costs about $16 million to build … but the cost of the propellant, which is mostly oxygen and a gas, is only about $200,000," Musk said. "So that means that the potential cost reduction in the long term is probably in excess of a factor of a hundred."

SpaceX tried twice earlier this year to land a Falcon 9 first stage on an "autonomous spaceport drone ship" in the Atlantic Ocean; both times, the booster came in too hard and exploded on the deck. Then, on June 28, a Falcon 9 rocket broke apart while launching a Dragon spacecraft filled with NASA cargo for the International Space Station. SpaceX ultimately cited a faulty strut as the root cause, and upgraded the Falcon 9 to fix the issue and improve performance.

"The Falcon 9 rocket we are about to launch has higher performance than the prior version due mostly to increased boost thrust, deep cryo oxidizer and a much larger upper stage engine bell," Musk wrote in a blog post Monday just before liftoff. "It also has a number of reliability enhancements, such as a redundant stage separation system and greater structural safety margins."

"It is clear that all of the time and hard work SpaceX spent upgrading the Falcon 9 paid off in this return to flight," Eric Stallmer, president of the Commercial Spaceflight Federation, said in a statement. "Through a year of hard lessons learned, SpaceX's December return to flight and successful planned landing of its first stage, just six months after the June mishap, reminds us of this industry's best qualities: agility, innovation and perseverance."

(Fun Fact: Musk named the Falcon 9 rocket after the fictional Millennium Falcon of "Star Wars" fame. But there's no news yet on when SpaceX might try to break Han Solo's 12-parsec record on the Kessel Run.)

SpaceX's Falcon 9 landing marked the first successful touchdown of an orbital-class rocket, but it isn't the only one to launch into space and make a return trip to Earth. Last month, Blue Origin, the rival private spaceflight company founded by billionaire Amazon CEO Jeff Bezos, successfully launched its New Shepard spacecraft on a suborbital trip (which didn't reach, orbit like SpaceX's Falcon 9) and landed safely at its West Texas launch site.

Musk said SpaceX will move the returned Falcon 9 from its landing site to the historic Launch Pad 39A — the same one used by NASA to launch the Apollo 11 moon mission in 1969. SpaceX is leasing the pad from NASA for future rocket launches.

SpaceX will test-fire the returned Falcon 9 booster on the pad to see how it performs after returning to Earth. That test, Musk said, is aimed at seeing if the booster could could be fit to fly again.

But don't expect to see this particular Falcon fly again. That milestone will likely come in 2016, Musk said.

"I think we'll probably keep this one on the ground because it's incredibly unique; this is the first one we've flown back," Musk said, adding that SpaceX will "put it somewhere" when all tests are done. "We should be doing well over a dozen flights next year. So I think probably sometime next year we will aim to refly one of the rocket boosters."