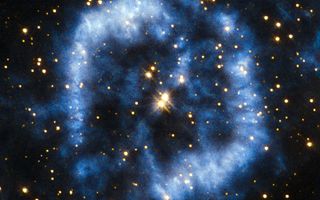 Menzel 2, a planetary nebula, arrives at its final stages of life as a white dwarf.
(Image: © ESA/Hubble & NASA)

Planetary nebula PK 329-02.2 in the Norma constellation in the southern sky, also known as Menzel 2, has spent an innumerable number of years as a winding blue cloud. Nearing the end of its life, the nebula has shed its outer layer and the cloud is dissipating, and Mz 2 is becoming a white dwarf. [See more planetary nebulae.]