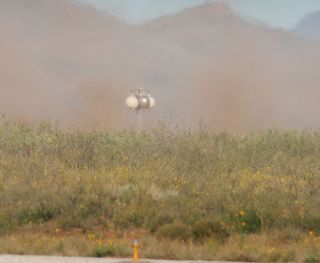 Lunar Lander Challenge competitor -- Pixel -- flew successfully again today at the Wirefly X Prize Cup. However, the craft ran into trouble on landing, tipping over and disqualifying the vehicle in a prize competition held early this morning. Built by Armadillo Aerospace, team engineers are looking over the craft in hopes of reflying and competing the hardware again today. Image
(Image: © SPACE.com/William Faulkner)

In Las Cruses, New Mexico, hundreds of educators, studentsand special interest groups took to the desert to watch history inthe making during one October weekend. For myself, it was my first ventureto this event in which I observed a variation in the development of technologyfor Rocket Racingteams, lunarexploration and how elevated competitionstimulates both cooperation and conflict within the members of the private andspace sectors.

While amazed at the amount of time and effort it took to putthe X Prize Cup together, there were somedisappointments in the desert that we were witnessed by all. One mightthink this to be a bad thing. This is not the case when dealing within humanand robotic space exploration as anyone in the business surely knows.

With great success, one must falter and learn, thentest...test...test. I was amazed that when the countdowns commenced, everyonestopped what they were doing and ran to the fence or just looked up to the skyto see a Rocketmanfly [image]with his rocket jetpack, or ArmadilloAerospace's "Pixel" vehicle [image]fly a 90 plus second jaunt to an altitude of 164 feet (50 meters) and over adistance of 328 feet (100 meters). They were unable, however, to make thereturn trip.

Pertaining to education, more than 5,000 students turned outon the first day of the event and were definitely inspired to learn more abouthuman spaceflight, mechanical and aerospace engineering, planetary science andmuch more. AnoushehAnsari, the firstfemale space tourist, was on hand to talk to members of the general publicand sign autographs. She even hinted of returning to the International SpaceStation to "where she belongs."

The National Space Society (NSS) was in full force handingout the award winning Ad Astra magazine to all who attended the eventand were on hand to answer questions on issues related to space tourism, publicpolicy and how to get involved in order to make the Vision for SpaceExploration a reality.

For one who attended the X Prize Cup for the first time Imust say that I was impressed as well as excited for what is being accomplishedthus far.

The X Prize Cup provided the inspiration, education for thenext generation of explorers and gave reason to celebrate a moment in humanhistory in which through heightened competition, the development of socialstrategies to work together in order to generate the defining characteristicsof human flight which will no doubt take us higher than we ever dreamed.

Veronica Ann Zabala-Aliberto is on the NSS board of directorsand is the founder and chapter president of National Space Society ofPhoenix. Zabala-Aliberto is currently a senior undergraduate student within theSchool of Earth and Space Exploration at Arizona State University who hasrecently been assigned to work on the LunarReconnaissance Orbiter mission, which launches in October 2008.