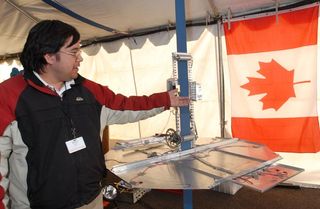 The BeamedPower and Tether Challenges at this year's Wirefly X Prize Cup did not produce any prize winners, though teamscame close in both competitions.

The winner of the Beamed Power Challenge had to create a crawler capable of climbing a 55-meter-long ribbon at a speed of at leastone meter per second using external power (solar, infrared, microwave, laser,or other). The University ofSaskatchewan (USST) crawler came closest, making the climb in 57 seconds, twoseconds short, and it was unable to descend on its own power. However, USST canclaim a first: they were the only team to hoist a cash payload aboard theirspace elevator: a Canadian $2 coin, a US $1 coin, a US $1 bill, and a tool tag.

Two otherteams were scheduled to compete on Sunday, including "Punkworks," which was to usemicrowave power, but neither team succeeded due to wind problems. USST madeanother attempt off-site on Sunday, operating with solar power only, but thenthe crawler lost alignment with the sun and slowed down. The prize will rollover to $500,000 next year.

RogerGilbertson of the Spaceward Foundationwas master of ceremonies for the Games. He suggested at least one "lessonlearned" from this year's competition. "This was the first time we held the competitionin this environment [the middle of an airport]. We didn't have the wind problemlast year, so we'll have to take that into account." Gilbertson was impressedby the way teams helped each other. "We've invented a new word:'coopertition'." This was demonstrated by the German team offering to loan USSTa generator to power their light source in exchange for a percentage of theirprize money; in another case, the Kansas City Space Pirates offered to renttheir mirrors to USST to assist with their lift.

The otherpart of the Space Elevator Games, the Tether Challenge, required teams toproduce lightweight (2 grams or .07 ounces) two-meter tethers capable ofexceeding the strength of a "house" tether. Only one team qualified for thecompetition, as the other three tethers were too short. These competed anyway,with the winner being the only tether longer than two meters.  Inhead-to-head competition with the house tether, the Astroaraneae tether broke at a force of1,330 pounds. This year's house tether could withstand up to 1,660 pounds offorce. If the winning team had run last year, they would have won; last year'shouse tether had a breaking strength of 1,240 pounds.

Dr. BradEdwards of the Spaceward Foundation noted that "The house and Astroaraneaetethers both achieved over 80% of the expected theoretical strength of the rawmaterial." This bodes well for future competitions. According to a report by theLiftPort Group, which is designing and developing space elevator technologies(and helped judge the Elevator Games), if material strengths continue toadvance at the current pace, a functioning space elevator may be built as early as 2031.