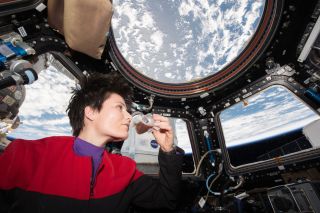 European Space Agency astronaut Samantha Cristoforetti sipped espresso for the first time in space May 3, 2015, from a cup designed for low-gravity use in the cupola of the International Space Station. Researchers are building such cups to learn about fluid dynamics in space.
(Image: © Samantha Cristoforetti on Twitter)

Astronauts aboard the International Space Station are testing beverage cups that let them literally wake up and smell the coffee.

Drinking in space is a strange experience — tilting a cup to your lips will likely leave the liquid unmoved, and any disturbance can send globules of (possibly hot) liquid out into the air. Suffice it to say, drinking is generally done with a straw from a sealed container to avoid dangerous situations.

But astronauts have been testing out some strangely shaped cups that keep liquid under control well enough to contain tasty juice or scalding coffee in an open-topped container, and hold it steady even while astronauts do flips or toss the cups back and forth. [Watch: Java in Zero-G — How Space Coffee Cup Works]

NASA astronauts Scott Kelly and Kjell Lindgren and Japanese astronaut Kimiya Yui have been kicking back hot and cold beverages in microgravity with the six prototype cups aboard the space station, made from a 3D-printed transparent polymer, as part of a research project to study how fluid dynamics work in space. Five of these cups hold 150 milliliters (5 fluid ounces) each, and one smaller one holds 60 milliliters (2 fluid ounces) — perfect for space-made espresso. The cups use a long crease to keep the liquid in line and to pull the liquid to the opening via surface tension as the astronaut sips.

"Wetting conditions and the cup's special geometry create a capillary pressure gradient that drives the liquid forward toward the face of the drinker," said Mark Weislogel, a team member on the NASA project; a senior scientist at IRPI LLC, a fluid-thermal engineering firm based in Oregon; and a mechanical engineer at Portland State University.

"An astronaut can drain the cup in sips or one long gulp in much the same manner as on Earth … without tipping their head, without gravity," he added. "It's a stable situation — even though drinking scalding liquids from open containers while aboard the International Space Station is generally considered a safety concern," he said in the statement.

Such cups make for a pleasant drinking experience for astronauts, and the cups' reusability helps to conserve resources. But they make up only one element of NASA's Capillary Flow Experiment. Through this project, scientists hope to learn more about the behavior of liquids in zero gravity, which, in turn, could help astronauts wrestle all different kinds of liquid systems aboard the space station.

"Management of water, liquid fuels, coolants and even drinks when the influence of gravity is negligible is a delightful challenge," Weislogel said. "If this can be accomplished passively, without moving parts, by special control of wetting properties, container shape and surface tension, we're all in. We love watching and studying the large liquid surfaces that can dominate fluid behavior in space. And if astronauts are enjoying their coffee in a richer, deeper manner than before … well, that's nice, too."