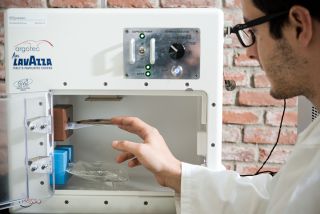 The "ISSPresso" machine, which is scheduled to arrive at the International Space Station in April 2015 to make high-quality coffee for astronauts. Water enters the machine through the bottom bag, and coffee is pumped into the upper bag.
(Image: © Argotec/Lavazza)

TORONTO — Moments after David Avino turned on an espresso machine in the middle of the International Astronomical Congress exhibition floor here Monday (Sept. 29), more than a dozen bystanders stopped in their tracks to watch it brew.

The machine — called ISSpresso — is a prototype similar to one that will fly to the International Space Station in April 2015 aboard Orbital Sciences' robotic Cygnus cargo vessel. It will take astronauts only minutes to set up ISSpresso on the orbiting lab — all they'll need to do is take out the box, secure the machine to the wall with bungee cords and get some water in a standard pouch. And then astronauts can enjoy some espresso with their space food.

Avino, managing director of Italian engineering and software firm Argotec, inserted a standard Lavazza espresso capsule into the top of the device. He placed a water pouch in the bottom and put in a second, smaller pouch to collect the coffee. [Watch a video about the space station espresso machine]

Only a minute after Avino turned on the machine, coffee began filtering into the pouch. When the pouch was full, Avino offered samples for people to sip. Beside him, Lavazza USA CEO Ennio Ranaboldo said the machine is already attracting attention at NASA, even from Administrator Charles Bolden, who stopped by the exhibition floor earlier Monday — which was, appropriately enough, International Coffee Day.

"People were dragging him away," Ranaboldo joked.

ISSPresso, a joint Argotec-Lavazza-Italian Space Agency project, was already underway last year when Italian astronaut Luca Parmitano said in an interview that the thing he missed most in space was a good cup of coffee.

"I was calling people, asking, 'Were you talking to Luca?'" Avino said.

Argotec modeled ISSPresso after a previously existing espresso machine. That process saved a great deal of development time; it took 1.5 years to get the machine ready, compared to about six years to design and build an espresso maker from scratch, company representatives said.

But Argotec did make some changes to the existing design, altering the brewing system to make it leak-free in orbit. (The exact changes are not being released for proprietary reasons.) The space-bound machine is so different, in fact, that only three parameters are the same as Earth-based espresso makers: the capsule of coffee, the brewing temperature of 167 degrees Fahrenheit (75 degrees Celsius) and the water pressure.

The inside was revamped to fit standard water pouches on the space station, and attachments were added to the outside so bungee cords could be used to secure the machine to a wall.

If the machine makes it to orbit on time aboard the Cygnus spacecraft, another Italian astronaut — Samantha Cristoforetti — will be there to try out the espresso for herself. Avino said the machine is getting attention not only with her, but also with the rest of the astronaut corps.

If the machine works as expected in orbit, the companies think it could also be used to rehydrate food and to brew other drinks, such as tea.

Lavazza plans to send regular shipments of its coffee on cargo runs to the International Space Station, making sure to send enough so the astronauts don't run out. The ISSPresso machine has been designed to last several years in orbit (the company did not specify exactly how long) based on a crew of six people having coffee once or twice a day.

The cost of the ISSPresso project has not been released publicly.