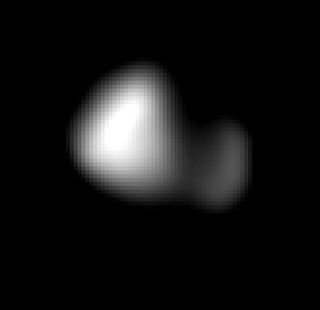 NASA's New Horizons spacecraft has beamed home photos of Kerberos captured during the probe's historic flyby of Pluto on July 14. The newly received images show that Kerberos is smaller and much brighter than researchers had expected.

Furthermore, the photos — which came down to Earth on Tuesday (Oct. 20) — reveal that Kerberos is composed of two lobes, one about 5 miles (8 kilometers) wide and the other 3 miles (5 km) in diameter. The moon may therefore have formed from a long-ago merger of two objects, New Horizons team members said.

Pluto has five moons: Charon, Nix, Hydra, Kerberos and Styx. Charon was discovered in 1978; researchers using NASA's Hubble Space Telescope first spotted Nix and Hydra in 2005 and Kerberos and Styx in 2011 and 2012, respectively.

All of these satellites are tiny except Charon, which, at 753 miles (1,207 km) in diameter is more than half as wide as the dwarf planet itself.

Astronomers knew Kerberors was small when they first discovered the satellite, but its true size comes as a surprise. Previous Hubble observations had shown that Kerberos exerts a strong gravitational influence on neighboring moons.

Scientists therefore "theorized that Kerberos was relatively large and massive, appearing faint only because its surface was covered in dark material," New Horizons team members wrote in the same statement. "But the small, bright-surfaced Kerberos now revealed by these new images show[s] that that idea was incorrect, for reasons that are not yet understood."

New Horizons has now allowed researchers to learn the size and shape of all of Pluto's satellites. Nix and Hydra measure 33 miles (54 km) and 27 miles (43 km), respectively, in their longest directions, while Styx is just 4.5 miles (7 km) wide.

New Horizons is still sending its vast flyby dataset back to Earth. All the images and measurements from the July 14 close encouter should be down at mission control by next August or September, mission team members have said.

The spacecraft may have another flyby in its future. On Thursday (Oct. 22), New Horizons performed a 16-minute engine burn, the first of four maneuvers that will put it on course for a small object called 2014 MU69. New Horizons will observe 2014 MU69 during a close encounter on Jan. 1, 2019, if NASA approves and funds an extended mission for the probe.