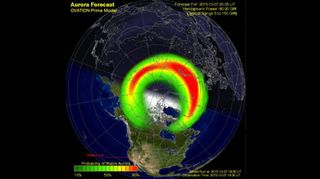 Editor's update for 6:20 pm ET: The Space Weather Prediction Group released a revised alert at 6 p.m. ET today, lowering the geomagnetic storm class to a G1 and a K-index of 5, with auroras now expected to be visible from the northern tier of the U.S., such as northern Michigan and Maine.

A geomagnetic storm kicked up by high-speed solar wind should amplify the northern lights tonight — making them potentially visible as low as Pennsylvania, Iowa and Oregon as the storm intensifies, space weather experts say.

According to an Oct. 7 alert from the National Oceanic and Atmospheric Administration's (NOAA) Space Weather Prediction Center in Boulder, Colorado, the storm will range from strong to extreme, reaching a G3 or greater on NOAA's scale and a K-index of 7 or greater. That means that auroras may be visible much farther south than their usual arctic locales, weather and viewing location permitting.

If you live in the potential visibility area, the best way to see the northern lights is to be well away from city lights in an area with extremely dark skies. [Best Aurora Photos of 2015]

The geomagnetic storm, which began early last night, was caused by a coronal hole — a gap in the sun's outermost layer and magnetic field that allows the solar wind to stream out forcefully. The hole appears darker than the surrounding area in photos from some watching spacecraft. The solar wind's fast-moving charged gas and plasma particles can fly out at speeds of up to 500 miles (800 kilometers) per second from this type of hole, and when they reach Earth's magnetic field they distort it, causing a geomagnetic storm that can generate auroras in the night sky (as well as potentially interfering with satellite navigation, radio communication and power systems).

Last night, skywatchers in the Arctic Circle saw an unusually bright outburst of auroras: so bright that they could be seen in the sky alongside shining city lights, according to Spaceweather.com, a website that tracks space weather and skywatching events. Any auroras that materialize further south, as the storm increases in power, will be much dimmer — but still an unusual treat for an area that cannot normally see them.

Editor's note: If you capture an amazing photo of tonight's northern lights or another night sky photo you'd like to share with Space.com and its news partners for a possible story or gallery, send images and comments in to managing editor Tariq Malik at spacephotos@space.com. Good luck!