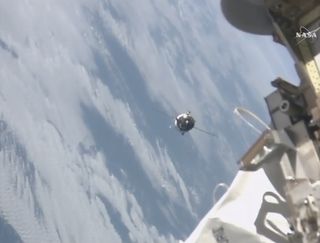 Russia's uncrewed Progress 61 freighter, also known as 61P, docked with the space station's Zvezda service module at 6:52 p.m. EDT (2252 GMT), while the two craft were zooming together over the North Atlantic Ocean. The cargo vessel, which is stocked with more than 3 tons of food and supplies for the astronauts aboard the orbiting lab, had launched atop a Russian Soyuz rocket from Baikonur Cosmodrome in Kazakhstan just 6 hours earlier.

Progress 61 will remain docked to the International Space Station (ISS) until December, when the ship will depart, full of trash, and burn up in Earth's atmosphere over the Pacific Ocean, NASA officials said.

The Progress vehicles aren't the only robotic spacecraft that bring cargo up to the $100 billion orbiting complex. Japan's HTV-5 resupply ship, for example, just left the ISS on Monday (Sept. 28) after wrapping up its mission.

Both companies failed in their last resupply attempts, however. In late June, the Falcon 9 broke apart less than 3 minutes after liftoff, and the Antares exploded just seconds after rising off the launch pad in October 2014.

The Progress has also encountered problems. In July, the Progress 60 freighter reached the space station as planned, but the previous mission never made it. Progress 59 began spinning wildly after separating from its Soyuz rocket and ended up crashing to Earth nine days after its late April launch.

All of these robotic resupply vessels are disposable, with the exception of Dragon, which is designed to make a parachute-assisted ocean splashdown.