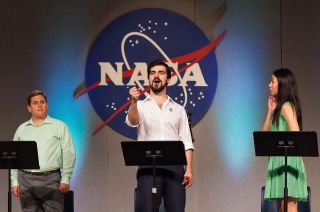 HOUSTON — It is not unusual, given NASA's presence in the community, to hear of people in Houston singing the virtues of space exploration.

Those voices though, do not often take the form of opera.

That will change this week, when a collaboration between the Houston Grand Opera and NASA debuts "O Columbia" at the Revention Music Center in downtown Houston. The chamber opera examines the past, present, and future of the spirit of exploration using the 2003 loss of the space shuttle Columbia as a touchstone.

"One of the things that opera does really, really well is get at big ideas in a way that is both moving and open ended [such] that it can be both specific and also atmospheric at the same time," stated composer Gregory Spears. "In that sense, it felt right when talking about NASA in general and in the middle part of the piece about Columbia." [Watch - Columbia Astronauts: In Their Own Words]

"It was a good way in order to contextualize the tragedy in a much larger history," Spears said.

"O Columbia" opens not in outer space, but at sea, and in the past rather than the future. Over the course of the 70-minute performance, the English-language opera focuses on why the risks of exploration are worth the rewards, and how that has influenced our present and future paths into space.

That opera's larger frame of reference grew out of Spears, librettist Royce Vavrek and the other members of the "O Columbia" production crew having the chance to consult with NASA astronauts, flight controllers, and others in the Houston-based Johnson Space Centercommunity, whose involvement helped to shape the tone and direction of the final piece.

"We started with an idea in January 2014 and then that idea became more solid once we had the chance to go to NASA and talk to people, ask questions and listen," said Brittany Duncan, program director for HGOco, the Houston Grand Opera's community collaboration initiative. "It has evolved a lot over time."

David Rose's wife introduced to him to opera not long after he went to work at the Johnson Space Center, first as an astronaut instructor and then later as a project manager during the space shuttle program. As a family, the Roses have Houston Grand Opera season subscribers for almost 20 years.

So it wasn't too much of a surprise when Rose embraced the chance to combine his work experience at NASA with his interest in opera.

"I wanted to see this particular art form begin to embrace topics associated with human exploration of space," Rose told collectSPACE. "Once I saw that the opportunity was there to participate, I jumped at it."

Through those he met over the years at the opera, Rose learned of "O Columbia" and in addition to sharing his own thoughts on its development, he introduced the HGO team to the NASA community.

"Initially, when I was presented with the proposal for the opera, the way it was conceived was as a reflection on the actual day of the Columbia tragedy — viewing the tragedy from the standpoint of several principals who might have been involved, people working at mission control, people in the Houston community, even, maybe, the crew," Rose recalled. "And reading through it, I, and then several other people who've worked in some way in human spaceflight who I consulted with, all had a pretty sharp reaction to it." [NASA's Columbia Shuttle Disaster Explained (Infographic)]

"Even years removed from the Columbia accident, it still seemed like a story that was going to touch on some raw nerves depending on how it was crafted," Rose recounted.

Rose and his colleagues came to realize that their view of the accident differed from those who were involved in the opera. Spears and Vavrek were younger and had grown up knowing only the space shuttle.

"We thought that we had a different historical perspective that put the Columbia tragedy into a different context than maybe someone coming at it who did not share a similar timeline or experience," Rose explained. "When we began interviews with the opera's production team, I and a few of the others focused on what Columbia meant in the broader context of the entire timeline of spaceflight and even more broadly, human exploration."

As a result of those meetings, "O Columbia" moved away from using the tragedy as its central theme.

"The Columbia disaster now sits in the middle of the piece and I feel like it's a piece of the piece, and so I hope that people come away from it with a feeling of exhilaration and awe that comes along when we really contemplate what it means to want to go further and discover things as people sail across the ocean and go up into space or travel to Mars," Spears told collectSPACE. "Yet doing that is very difficult. There are incredible challenges and tragedies that go along with that."

"I think what we impressed on the production team was that since Columbia, which is a whole decade in the past, still being in Earth orbit in regards to our current missions and with a really protracted timeline for when we will next go further, is very unsettling, if not deflating," Rose stated. "There is a pain not only in the circumstances that led to the Columbia accident but to everything that has unfolded in the human exploration program since then."

Continue reading at collectSPACE about "O Columbia" and the balance of hope and despair in the Houston Grand Opera production.