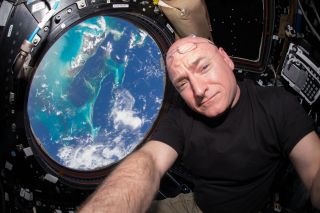 NASA astronaut Scott Kelly is spending a year in space during his Expedition 44 mission to the International Space Station. Kelly and Russian cosmonaut Mikhail Kornienko are flying the yearlong space mission to study the effects of long-term spaceflight on the human body.
(Image: © NASA)

Two space travelers on the International Space Station are entering rarely tread territory as they pass the six-month mark in a yearlong stay in orbit. The mission will help scientists understand how humans might cope with a journey to Mars.

American astronaut Scott Kelly and Russian cosmonaut Mikhail Kornienko have been living on the space station for about six months and won't be going home for another half-year. Their yearlong space mission is about twice as long as a typical extended stay on the station, so compared to typical astronauts, they're spending twice the time away from friends and family, twice the time in weightlessness, and twice the time exposed to space radiation — and experiencing twice the dose of physical and mental stress.

"I expected this to not be easy. A year is a long time," Kelly told reporters during an in-flight interview on Sept. 8. Kelly and Kornienko are undergoing a swarm of scientific studies that may shed light on the mental and physical changes the human body undergoes during long spaceflight missions. The long-term goal of the one-year mission is to help develop better ways to prepare and protect astronauts as they take the next big leap beyond Earth — possibly on a journey to the Red Planet. [NASA's One-Year Space Mission in Pictures]

"I feel pretty good overall," Kelly said Monday (Sept. 14) in an in-flight interview on NASA TV. "I definitely recognize that I've been up here a long time and have just as long ahead of me. But I feel positive about it."

Kelly added that he has consciously paced himself more slowly on this mission than on his last trip into orbit, which put him on the orbiting laboratory for 159 days.

"I intentionally thought about ways for me to get to the end of this with as much energy as I had in the beginning," Kelly said. "I intentionally don't work at the same pace I did last time I was up here, when I felt like I could go at 100 percent speed for the full six months. I can't do that. So I consciously try to throttle myself back at certain times and have a really good balance between work and rest. And that's what I would encourage anyone who attempts to spend this amount of time in this type of environment, is you just have to pace yourself."

If humans were to take a trip to Mars using near-future technology, the journey would likely take more than one year each way. While Kelly and Kornienko are not the first astronauts to surpass six months in space — five Russian cosmonauts have spent more than a year in orbit — relatively little scientific study has been done on those long-term space travelers. With the one-year mission, scientists will get their hands on a massive haul of data revealing the physical effects of long-duration spaceflight. Ultimately, this may help scientists understand how to assist and protect astronauts going to Mars or beyond.

"Physically, I feel good […] but there are a lot of effects of this environment that we can't see or feel, like bone loss, effects on our vision, effects on our genetics — DNA, RNA and proteins — and that's why we're studying myself and [Mikhail Kornienko] on this one-year flight," Kelly said Monday. "I think right now the jury's out on [what those effects are]. We're going to have to get all the data and have the scientists analyze it […]. Hopefully, we'll find out some great things about me and my colleagues spending a year in space." [The Human Body In Space: 6 Weird Facts]

While the results of the scientific studies on Kelly and Kornienko will not be revealed until after the mission is over, Kelly said he has taken note of how his body has adjusted to life in microgravity. He said spending a long time aboard the station means that he continues to adapt.

"So far, I've found that it is a continuous thing," Kelly said. "It gets less significant over time, but I do notice that I can do things now that I couldn't do right when I first got up here, even though I had flown 180 days in space before. My ability to move around is really improved over time and continues to improve. And, you know, you just get more comfortable. Your clarity of thought is greater. Your ability to focus. Things like that. I have found that the adaptation has not stopped. And it'll be interesting to see where I'm at six months from now."

While a one-year mission on the International Space Station is no easy task, it is certainly very different from a trip to Mars. Space travelers on a journey to the Red Planet would travel through millions of miles of empty space, far from home and locked up with the same group of people for the entire trip. The astronauts on the orbiting station have it somewhat easier: They can see Earth. They have a relatively quick way to get home if the need arises, and their crewmates change from time to time.

But Kelly and Kornienko will experience some of the mental strain of a Mars mission while they are on the station, including not being able to go outside (except during spacewalks, which aren't exactly a walk in the park).

"This is a very closed environment. We can never leave. The lighting's always pretty much the same — the smells, the sounds, everything's the same," Kelly said yesterday. "I think even most prisoners can get outside occasionally in a week. But we can't. And that's what I miss, after people."

In the Sept. 8 interview, Kelly was asked what he thought might be the difference between his mindset at the halfway point of the one-year mission, and the mindset of some future crew reaching a halfway point on a journey to Mars.

"I think for the folks who go to Mars, especially the first time, that's going to be such an incredible destination and event that they're going to be really psyched up for getting there," Kelly said. "And I'm not saying I'm not psyched up for the rest of this, but in some ways, almost being halfway through, a lot of what we're going to be doing is going to be similar to what we've already done. And we have a person here […] who is getting ready to leave us — Gennady [Padalka]. And that obviously wouldn't happen on [a journey to] Mars. That makes it a little bit different — people coming and going. So I think it's hard to compare the two experiences, but man I'm excited for the folks who get to go to Mars someday."