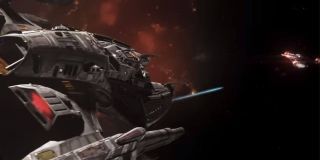 A new (but unofficial) "Star Trek" film is out there now for the world to see — for free.

"Star Trek: Renegades," the 90-minute first installment of a planned Internet series, was released on YouTube Monday (Aug. 24). The film is not a part of the official "Star Trek" universe — it was financed primarily by three crowdfunding campaigns over the last several years — but it does feature characters and actors familiar to Trekkies.

For example, Walter Koenig again appears as Pavel Chekov, who has risen to the rank of admiral in the new film (a far cry from his ensign days in "Star Trek: The Original Series"). And Robert Picardo reprises his role as Dr. Lewis Zimmerman, the scientist who created Starfleet's Emergency Medical Hologram.

"When planet after planet winks out of existence, yet Starfleet refuses to act, Chekov turns to Commander Tuvok (Tim Russ, who also directs), the new head of Starfleet’s covert operations division, Section 31. Together, they assemble a new elite strike force, consisting of rogues, outcasts and criminals, led by the fearless yet haunted Lexxa Singh (Adrienne Wilkinson)," the "Star Trek: Renegades" website states.

"The Renegades’ mission is simple: take on an army and stop their leader, Borrada (Bruce Young), from destroying the Earth," the website adds. "Outnumbered and outgunned, the ragtag crew is in an adrenaline-pumping race against time and space. But they soon find their foes are the least of their concerns: the real trouble may be coming from within!"

You can watch the full movie on YouTube here: https://www.youtube.com/watch?t=528&v=eE2Wgop9VLM