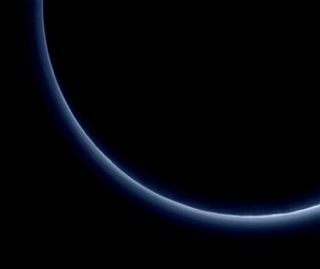 Pluto's atmosphere, backlit by the sun in this image taken by NASA's New Horizons spacecraft, contains a very high level of nitrogen despite constantly leaking it out into space.
(Image: © NASA/JHUAPL/SwRI)

Something mysterious is happening on the surface of Pluto: No matter how much nitrogen the atmosphere releases into space, it's still chock-full of the stuff. New work examines the possible culprits for the stealthy nitrogen resupply, hinting at active geologic activity inside the dwarf planet.

Pluto's atmosphere has 10,000 times lower pressure than Earth's at the surface, and hundreds of tons of nitrogen are escaping every hour. Nevertheless, the atmosphere remains 98 percent nitrogen. Researchers are investigating potential sources of the nitrogen: whether it's riding in on comets, flying from impact craters or — what they think is most likely — a geological process pulling nitrogen up and out of Pluto's interior.

"More nitrogen has to come from somewhere to resupply both the nitrogen ice that is moving around Pluto's surface in seasonal cycles and the nitrogen that is escaping off the top of the atmosphere as the result of heating by ultraviolet light from the sun," Kelsi Singer, a postdoctoral researcher at the Southwest Research Institute, said in a statement. Singer is an expert on impact craters, and she is working with Alan Stern, New Horizons' principal investigator, to pin down the atmospheric nitrogen's source. [Mysterious Ice Plains Spotted on Pluto (Video)]

The gas probably isn't replenished by extra nitrogen on comets — that wouldn't bring in enough to replace the amount lost to space. And although comet impact craters could excavate some nitrogen just under the dwarf planet's surface, that wouldn't add enough either, unless there's an extremely deep layer of nitrogen ice right there (and there isn't currently any evidence for that).

The remaining option, and the one the duo suggested in their paper, published this month in The Astrophysical Journal Letters, is that activity within the dwarf planet is drawing internal nitrogen upward to be released.

"Our pre-flyby prediction, made when we submitted the paper, is that it's most likely that Pluto is actively resupplying nitrogen from its interior to its surface, possibly meaning the presence of ongoing geysers or cryovolcanism [ice volcanoes]," Stern said in the statement. Other features also support this process: New Horizons' new flyby observations reveal landforms suggestive of heat rising from the surface.

"We currently have only a tiny fraction of the data back from the New Horizons flyby, but the fact that there are young-looking areas on Pluto hints at relatively recent geological activity," Singer wrote in a NASA blog post.

Stay tuned, she said: The New Horizons spacecraft is sending back more and more detailed information collected in its July flyby, and over the coming months, researchers will learn a great deal more about the dwarf planet's inner life and atmosphere.