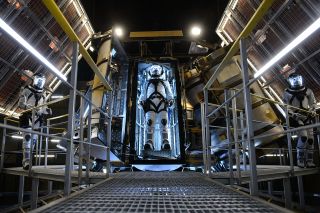 In the 2015 "Fantastic Four" movie, the main characters find themselves teleported to a different dimension.
(Image: © 20th Century FOX)

In the new "Fantastic Four" movie from 20th Century Fox, the classic rocket-based origin of Marvel's First Family is dropped for one with interdimensional teleportation and mystic energy. What happened?

(And yes, in case anyone asks, we are aware that a comic reboot series from 2004, Ultimate Fantastic Four, had the new origin story first.)

Michael Doran, managing editor of Newsarama, Space.com's sister site, has a bold theory: "From a science fiction standpoint, space has been conquered." [10 Things Worth Noticing in "Fantastic Four"]

First, some background. The Fantastic Four, in their first appearance in 1961, get their superpowers by way of cosmic rays. The Cold War space race is on, and a scientist hijacks a rocket he's building, whose test flight has been delayed, to try and make it to space before the enemy does. He brings along three others, and the space adventurers are all hit by radiation from a sudden solar flare, causing a crash landing — and widely varying superpowers.

Spoiler Alert: In the new movie "Fantastic Four", on the other hand, the four are teleported to an alternate universe (to what looks like a rocky, barren planet) where their bodies are exposed to an unknown, mystical energy.

"In a strange way, despite the hundred minutes of the movie being largely an origin story and how these characters got where they are, in terms of actually getting superpowers, there's probably a little less real science this time around, in 2015, than there was in 1962," Doran told Space.com.

Elements of the original story clearly came from historical events going on at the time. The space race really was on, and the U.S.S.R. had just put the first man in space. Radiation, too, was in its heyday: Spider-Man, the Hulk and others also gained their powers by some form or other of the invisible rays.

Modern-day superhero narratives often tweak origin stories to sound less fantastical and more current: Peter Parker's spider bite in "The Amazing Spider-Man" (2012) comes from a genetically modified spider rather than a radioactive one, for instance, since by now we have a better handle on radioactivity. But in this case, the new movie seems to have picked a nonspecific "energy" rather than a current mystery of the universe. All of the focus is on the consequences, and the group's superpowered adventures.

Space, too, is de-emphasized, at least as an automatic "wow" factor.

"In real-world application, it's still obviously this frontier we've hardly made a dent in," Doran said. "But for the purposes of comic books and the purposes of genre entertainment, space really isn't much of a mystery anymore. The world of comic books and genre fiction has been invaded by aliens countless times, we have warp capability, we have teleportation. It's well-worn territory from a science-fiction standpoint."

As an example, Doran points to 2012's "The Avengers." In that movie, the fact that a portal into space releases enemy aliens to be fought is almost portrayed as a mundane event, a side note that gives a reason for the gigantic Battle of New York, he said.

Doran points to 2014's "Interstellar" as a science fiction movie that bucks this trend. It does so by trying to bring the mystery and wonder back into space, to remind viewers that there's still a staggering amount out there we don't know about. It is able to accomplish that goal by wholly focusing on space travel's epic scope and challenges. Whereas, "from a comic book standpoint," Doran said, "space isn't really treated as that serious frontier anymore."

Perhaps, in a genre that relies on wonders, it's too easy for the superpowers, epic computer generated (or illustrated) battles and mystic energies to overshadow the real-life wonder of space, to be found just by looking up.