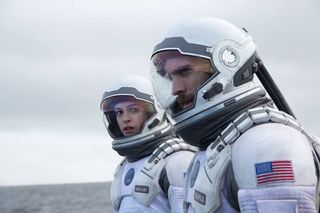 A still from the science fiction movie "Interstellar," showing two astronauts on the surface of an alien planet.
(Image: © Space.com )

In the science fiction epic "Interstellar," audiences went on a journey through a wormhole, to the edge of a black hole, and onto the surface of alien planets — what inspired the awesome ideas in this out-of-this-world tale?

To find out, Space.com chatted with the movie's screenwriter Jonathan Nolan and science advisor Kip Thorne about the science of the Academy Award winning movie during an event at NASA's Jet Propulsion Laboratory ahead of the "Interstellar" blu-ray release today (March 31).

"Interstellar" takes place in the not-too-distant future, when Earth's plant life has been afflicted with a fatal blight. With food supplies dwindling and people starving, a group of astronauts sets out on a journey to find a new planet to call home. [What's New in Black Holes? 'Interstellar' Physicist Kip Thorne Tells All]

At the JPL event, called "The Science of 'Interstellar,'" Space.com contributor Rod Pyle had the opportunity to talk to Nolan and Thorne. Nolan co-wrote the script for "Interstellar" with his brother Christopher Nolan, who also directed the film. Thorne was formerly the Feynman Professor of Theoretical Physics at Caltech and was an executive producer and science consultant on the film. He also wrote a book inspired by the movie, called "The Science of Interstellar."

Space.com: So why should humanity go to these places, and indeed, why go into space at all?

Jonathan Nolan: This was a question, as we worked on the film, [that] resonated with me more and more. The answers kept coming back from Kip's friend Stephen Hawking and Elon Musk, emphasizing the reality of our situation, which is that humanity, for our entire history, has existed only in one very specific point in space-time. Kip and I spent one very memorable afternoon with a group of biologists and astrobiologists, considering all the different ways in which life could be extinguished from this planet … and the more urgent the question seemed, or the proposition seemed, that we [should] find other perches in this universe. We talked about life in the universe, and by the time I was done with the project, I was convinced that it seems self-evident that there is other life out there. But the only life that we are aware of in the universe is us. Whether you like us or don't, we're the only game in town. So that some cosmic event, and we considered many of them, might extinguish us so quickly … it seems only practical that we get out there and see what else is out there.

Kip Thorne: Agreed. I think that the future of the human race is to spread through the universe, and now is the time that we should be laying the foundations for that.

Space.com: Your visualization of the black hole was brilliant — it was new, it was different, it was complicated. Can you talk a little bit about how that came about?

Nolan: They are things that you understand very well…

Thorne: Yes – and they are explained by Einstein's equations. So I sat down with Paul Franklin [the visual effects supervisor] and his team at Double Negative in London, and we said that we would portray a black hole the way it would actually be seen if you had a camera up close to it. So we [created visual effects in which we] placed an accretion disk of hot gas around the black hole, and stars and nebulae out away from the black hole, and placed a camera near the black hole, in orbit around it. And we took little beams of light, and we propagated them from this part of the disk up to the camera, from that dust cloud to the camera, from this nebula to the camera, until ultimately we had 23 million pixels in the image, entirely based on solving Einstein's [equations], and that's the way it would look.

Space.com: And you gifted that to the science community, yes?

Thorne: We have. Colleagues of ours in the science community had also done somewhat similar simulations. The difference is not that we found something startling and new, but that we actually had to develop a new set of techniques to do these simulations. This [was something that] the science community had never had, and that Hollywood had never had. Also, one problem was that when stars traveled across an IMAX screen, we got flickering if we did it the way everybody had always done it. And if we had an object with a bright edge on the screen, you'd get flickering. So to get rid of the flickering, we had to develop a whole new set of tools for doing this. So I believe that these tools will become standard tools both for astrophysicists and for the CGI folks in Hollywood. This just came out of the requirements for the film.