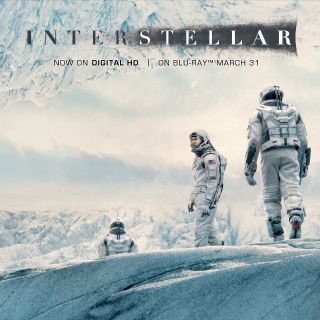 The science fiction movie "Interstellar" will be available on DVD and Blu-ray on March 31. The Blu-ray release includes 3 hours of special features about the science of the film, and the tremendous effort put forth to create the world of "Interstellar."
(Image: © Paramount Pictures)

The new release, available beginning on March 31, offers the movie on Blu-ray and DVD, and a second Blu-ray disk with three hours of bonus content, including the Discovery Channel special "The Science of Interstellar," and 14 short features about the many science-related aspects of the movie. [Related:Inside 'Interstellar': Q&A with Jonathan Nolan and Kip Thorne]

In addition to the Blu-ray release, there are other ways for fans to dive into the world of "Interstellar": on April 7, Fathom Events will host a one-night screening of the movie, followed by some exclusive special features, including footage of Nolan, Thorne and the movie's music composer Hans Zimmer, discussing the film. For a brief overview of the science featured in the movie, check out this Bite Size science page. And finally, for a truly immersive experience, check out the "Interstellar" text adventure game.

We were absolutely enchanted by all the awesome detail that went into making the world of "Interstellar." The Blu-ray special features disk highlights all those fantastic details. Here are a few of our favorite features from the new release:

The science of 'Interstellar'

The biggest dose of pure science available on the "Interstellar" special features Blu-ray is an extended version of the  television special, "The Science of 'Interstellar."

The broadcast special looks at the major scientific aspects of the film, and features interviews with real scientists studying those subjects. The TV special includes interviews with Kip Thorne, a theoretical astrophysicist at the California Institute of Technology, who acted as science adviser and executive producer on the film, and wrote the book "The Science of Interstellar" (read an excerpt here).

The TV special also includes interviews with Natalie Batalha, a researcher at the NASA Ames Research Center, who is searching for habitable planets outside our solar system using the Kepler Space Telescope; Andrea Ghez, a researcher at the University of California Los Angeles, who studies the monster black hole at the center of the Milky Way; and Sean Carroll, a scientist at the California Institute of Technology, who explains some of the strangest science in the movie, like how gravity can slow down time.

One of the Blu-ray special features includes a look at the making of the Endurance spaceship, which carries the movie's astronauts to the new planets that may provide a home for humanity.

The Endurance is a series of rectangular pods, each about the size of a two-car garage, that are connected end-to-end; they are then bent into a circle, and the entire thing spins like a wheel. Because the pods are on the outside of the wheel, the spinning motion creates an artificial gravity for the astronauts. A similar design was used for the spinning ship in "2001: A Space Odyssey."

Because "Interstellar" takes place in the "not too distant future," the director and production designer for the film took strong inspiration from modern spaceflight vehicles, including the International Space Station (ISS).

"We decided that we wanted it to have something of the character of the ISS, in that we wanted it to look modular," Nolan said in the feature. "We wanted it to look like small parts had been flung up on different missions and in the zero gravity of low-Earth orbit they'd been assembled into this somewhat more fragile ship than you could ever build on Earth and then lift off the Earth, because of the strains and stress due to gravity."

One futuristic element of the "Interstellar" universe is the sophistication of the robots. The two robots who accompany the astronauts on their journey are named TARS and CASE. According to the special feature, the robots were more often described as "articulated machines," by the director — suggesting he wanted them to be more like living beings than soulless computers.

The bots look like large metal rectangles — as tall and wide as a refrigerator but only about two feet thick. But the bots have multiple appendages that can unfold to help them walk, gallop, plow through water, or serve any number of other purposes. At the end of the day, they fold down into the floor of the Endurance to save space.

In the film, the robots are treated like members of the crew, and have a very human presence about them.

That's because the robots were puppeteered by human beings. Actor Bill Irwin voiced the robot TARS, and also operated the robot's metal shell during most scenes. In scenes that take place aboard the spaceship, Irwin is behind TARS's metal exterior, moving the robot's appendages to make him walk. His presence makes TARS feel more like a living member of the crew.

Movies that take place in space face many challenges, but one of the most significant is simulating microgravity.

For the zero-G shots in "Interstellar," the filmmakers used a few different methods. A large portion of the microgravity was done by suspending the actors on wires and having them pantomime microgravity.

To make this more realistic, the filmmakers sought the assistance of former astronaut Marsha Ivins, who flew in five shuttle missions between 1990 and 2001.

Ivins acted as a technical consultant for the film, and helped the actors learn how to move as if they were in zero gravity. She sent the actors videos of astronauts in microgravity and helped them pay attention to small details.