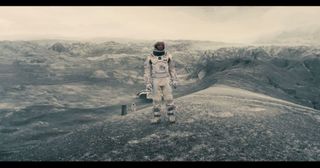 A screengrab from the final "Interstellar" trailer showing Cooper (Matthew McConaughey) and a exploring an alien planet.
(Image: © Paramount Pictures)

"Interstellar" may be a work of fiction, but the upcoming film gives viewers an amazingly accurate view of a black hole, its creators say.

Renowned theoretical physicist Kip Thorne, an "Interstellar" executive producer, worked closely with the movie's visual-effects crew to come up with an unprecedentedly realistic portrait of "Gargantua," the monstrous black hole at the movie's core.

"Neither wormholes nor black holes have been depicted in any Hollywood movie in the way that they actually would appear," Thorne said in a new explainer video produced by Wired magazine, which you can watch above. "This is the first time the depiction began with Einstein's general relativity equations."

The visualization of Gargantua revealed that black holes twist their "accretion disks" of infalling material into complex and stunning shapes — a find that had quite an effect on Thorne.

The collaboration between Thorne and the "Interstellar" visual-effects people, led by Paul Franklin, will even extend to published papers in the scientific literature, Thorne said.

"We're going to write several technical papers about this — one aimed at the astrophysics community and then something for the computer-graphics community — saying, Here are some things we've discovered about gravitational lensing by rapidly spinning black holes that we never knew before," Thorne said.

"Interstellar" is directed by Christopher Nolan and stars Matthew McConaughey, Anne Hathaway, Jessica Chastain and Michael Caine. In the movie, humanity's survival on Earth is threatened, so a group of explorers launches on an extragalactic voyage to seek out a new home for our species. "Interstellar" will be released throughout the United States on Nov. 7.