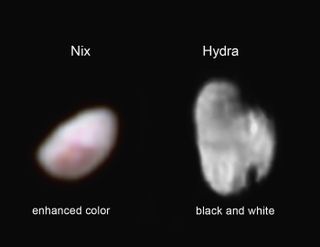 Two of Pluto's small satellites are getting their moment in the sun.

Newly released photos captured by NASA's New Horizons spacecraft during its historic Pluto flyby on July 14 reveal intriguing new details about Nix and Hydra, two of the dwarf planet's five satellites. For example, Nix is shaped like a jelly bean and bears a curious red patch, while Hydra resembles a big, gray mitten.

The reddish region on Nix also appears to have a bull's-eye pattern, suggesting that it's an impact crater, researchers said. [New Horizons' Pluto Flyby: Complete Coverage]

"Additional compositional data has already been taken of Nix but is not yet downlinked. It will tell us why this region is redder than its surroundings," New Horizons mission scientist Carly Howett, of the Southwest Research Institute in Boulder, Colorado, said in a statement today (July 21).

"This observation is so tantalizing, I'm finding it hard to be patient for more Nix data to be downlinked," she added.

The Hydra image shows two apparent craters, and suggests that the upper and lower portions of the moon may be made of different stuff, at least on the surface. (In the photo, the upper part of Hydra looks darker than lower regions.)

"Before last week, Hydra was just a faint point of light, so it's a surreal experience to see it become an actual place, as we see its shape, and spot recognizable features on its surface for the first time," mission science collaborator Ted Stryk, of Roane State Community College in Tennessee, said in the same statement.

Pluto's other known moons are Charon, Kerberos and Styx. At 750 miles (1,207 km) in diameter, Charon is more than half as wide as Pluto itself, leading many researchers to regard Pluto-Charon as a binary system. Kerberos and Styx are even smaller than Nix and Hydra.

By mid-October, New Horizons will likely beam home images it took of Kerberos and Styx during the July 14 close encounter, NASA officials said.

It has taken a long time for scientists to take the measure of the Pluto system, which lies about 39 times farther from the sun than Earth does on average. The dwarf planet itself was discovered in 1930, and Charon wasn't spotted until 1978. Nix, Hydra, Kerberos and Styx were all detected by NASA's Hubble Space Telescope between 2005 and 2012.

Researchers, and the rest of humanity, finally got their first up-close look at these far-flung bodies when New Horizons zoomed through the Pluto system on July 14, coming within 7,800 miles (12,500 km) of the dwarf planet's surface.