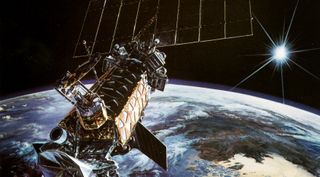 The explosion of a 20-year-old military weather satellite earlier this year was likely caused by a failure of the spacecraft's battery-charging system, investigators have concluded.

The U.S. Air Force's Defense Meteorological Satellite Program Flight 13 satellite, or DMSP-F13 for short, which launched in March 1995, blew apart on Feb. 3, spawning a new cloud of space junk that includes at least 147 objects as large as, or larger than, a baseball.

Early indications pointed to a problem with the satellite's power system, and those suspicions have now been borne out by the full investigation. [Space Junk: What Can We Do About It? (Video)]

"Analysis indicates one of the wiring harnesses lost functionality due to compression over a long period of time in the battery charge assembly," Air Force officials wrote in a statement today (July 20). "Once the harness was compromised, the exposed wires potentially caused a short in the battery power, leading to an overcharge situation with eventual rupture of the batteries."

Six other DMSP satellites currently orbiting Earth share this battery-charger system and thus may be vulnerable to the same issue as they age, officials added. Only one of these six, DMSP-14, is still operational, but the problem can crop up in defunct spacecraft as well.

"While there are no indications of an issue with the battery charge assembly housing on DMSP Flight 14, the results of the DMSP Flight 13 review coupled with ongoing technical analysis will be included in our routine constellation sustainment planning process moving forward," Air Force Col. Dennis Bythewood, 50th Operations Group commander, said in the statement.

The Joint Space Operations Center (JSpOC) at Vandenberg Air Force Base in California is currently tracking 147 pieces of space junk spawned by the breakup of DMSP-F13, which (when intact) was about the size of a one-car garage.

These pieces, which range from the size of baseballs to basketballs, currently share an orbital regime with 110 spacecraft, but no collisions appear to be imminent, officials said.

"In accordance with our ongoing efforts to protect the space domain, the JSpOC will continue to monitor this debris along with all of the items in the space catalog in order to enhance the long-term sustainability, safety and security of the space environment," JSpOC Director Col. John Giles said in the statement.

DMSP-F13 was designed to gather data for four years on orbit. But the spacecraft kept working for nearly 20 years, providing weather data that was important to a number of different U.S. military operations overseas, Air Force officials said. In August 2014, the satellite completed its 100,000th orbit of Earth.