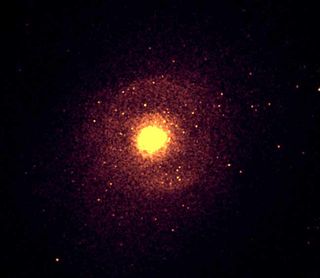 This Chandra image of M87 shows high energy X-rays. The faint, outer ring is about 85,000 light years across and gives an unambiguous signature of a weak shock wave (like a sonic boom) generated by an outburst from the supermassive black hole at the center of M87. The properties of the shock, including the change in temperature and density in the gas, are consistent with classical physics. The bright yellow, inner ring may be the gas just outside the "piston" that is powering the shock further out, and the ring in the middle was probably produced by another outburst.
(Image: © NASA/CXC/CfA/W.Forman et al.)

A gigantic sonic boom and a periodic deep cacophony of sound emanated from a supermassive black hole, according to observations by NASA's Chandra X-ray Observatory.

The black hole, one of the biggest in the universe, lies at the center of M87, a nearby elliptical galaxy within the Virgo cluster of galaxies.

Scientists detected loops and rings in the hot, X-ray emitting gas that surrounds the galaxy and permeates the cluster. These features provide evidence for periodic eruptions that occurred near the supermassive black hole and generated pressure waves in the gas that manifest themselves as sound.

"We can tell that many deep and different sounds have been rumbling through this cluster for most of the lifetime of the universe," William Forman of the Harvard-Smithsonian Center for Astrophysics said yesterday.

These noisy outbursts occur when material falls toward the black hole. While the black hole devours most of the material, some of it is violently ejected in jets from regions close to the black hole that push into the cluster's gas.

These outbursts occur every few million years and prevent the gas from cooling and forming new stars, which is why M87 has retained its elliptical shape.

"If this black hole wasn't making all of this noise, M87 could have been a completely different type of galaxy, possibly a huge spiral galaxy about 30 times brighter than the Milky Way," said team member Paul Nulsen.

The Chandra observations also found a nearly circular ring [image] of high-energy X-rays about 85,000 light-years in diameter centered on the black hole. It is the strongest evidence to date of a shock wave produced by a powerful explosion, the astronomers said.