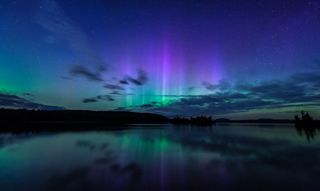 Mike Taylor has been a landscape and studio photographer for over 20 years and teaches night photography and processing-technique workshops for the public. His images recently illustrated the book "The Secret Galaxy" by Fran Hodgkins (Tilbury House Publishers, 2014). Taylor contributed this article to Space.com's Expert Voices: Op-Ed & Insights.

On June 22, word went out that a boost of activity on the sun would produce stunning auroras, so I ventured to Moosehead Lake, located just above the 45-degree latitude.

The brightly colored illumination of the northern lights, or aurora borealis, is created by flares emitted by the sun, with the resulting solar winds striking the Earth's atmosphere to create charged particles that emit light. The resulting video consists of approximately 1,400 still frames that I captured between 10 p.m. EST on June 22, 2015, and 3 a.m. EST on June 23, 2015.