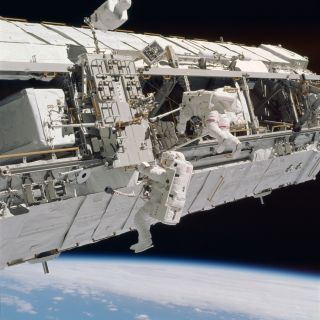 NEW YORK - Steely-nerved test pilots were the first men in space, but that isn't what you always want on a longer trip.

During the World Science Festival, held last month in New York City, astronauts and doctors met at the Intrepid Sea, Air & Space Museum to talk to CNN's Bill Weir about all things space, including how astronaut culture has changed over the years, and what it is like to be in space for long periods of time.

On the panel were Michael López-Alegria, a former astronaut who is the current NASA record holder for the single longest spaceflight mission, and has logged more hours performing extravehicular activities (spacewalks) than any other American; Jennifer Fogarty, physiologist for NASA's Space and Clinical Operations Division, who literally wrote the book on adaptations to space; and Jack Stuster, an anthropologist, who spent decades studying people in extreme environments such as Antarctic expeditions. Stuster has also helped NASA train astronauts for longer-term missions.  [The Most Extreme Human Spaceflight]

López-Alegria said test pilots were good for the short missions that characterized the early space program. But the panelists noted that longer stays in space require a somewhat different mindset, less akin to the military and more collaborative. He noted that the culture change shows up in the way shuttle missions are run. In the early days of crewed spaceflight, conversations with ground control were terse. "You didn't key the mic unless you knew what you were going to say," he said. "NASA was used to scheduling things pretty tightly."

Today, things are rather different. Often, complex problems need to be solved, and the stereotypical military structure won't work, López-Alegria said. "It's more of a conversation," he said. "It's no longer military people saying, 'Go charge up that hill.'"

People also need days off, and that's become clearer as missions have stretched out into months aboard the International Space Station.

Some of that cultural change has come about because the kind of work people do in space has diversified a lot, the panelists said. "The original astronauts were single-seat pilots," Stuster said. "Now, astronauts are physicians, scientists or even managers."

Fogarty added that the culture at NASA is much more egalitarian, as well, especially as women have joined the program. "[Astronauts] used to come from primarily military backgrounds," she said. "Now we look for flexibility and adaptability."

Social dynamics will be important for longer trips, especially if NASA is serious about sending humans to Mars. Stuster noted that some earlier expeditions to the Arctic and Antarctic might offer some useful lessons. Variety in diet and activity, as well as a shared goal, all go a long way, he said. "A sense of common purpose helps overcome the cultural differences. […] It's also important to select compatible personnel."

Another aspect of personnel that should be considered, he said, is that people who are good at shuttle missions might not be the best for a years-long Mars trip. "I've had people come to me and say they love the shuttle but wouldn't want to spend six months on the ISS," Stuster said.

The panel noted that morale on a long mission will be affected by the time lag of communication signals. López-Alegria noted that aboard the ISS or space shuttle, it was possible to essentially make a phone call to any number on Earth. That won't be possible on a Mars mission, since after a certain point, radio signals will take several minutes to reach Earth.

Psychology aside, other important issues on a long mission will be food and health. Food has a social aspect to it, López-Alegria said. And there are changes in the way food tastes in space. He recounted how, when training for a space station mission, he developed a taste for a certain Russian dish of lamb and vegetables. Once in space, though, it got to the point where the smell made him nauseous. Then it became bearable, and even enjoyable again.

NASA, by the way, has a no-alcohol policy. "I really missed a glass of wine with dinner," López-Alegria said.

Fogarty said for a Mars mission, while vegetable crops could provide a lot of vitamins and nutrients, one big challenge will be providing astronauts with enough protein. Another concnern is astronaut bone density, and NASA funds research into drugs that could help prevent the loss of bone mass that occurs in microgravity. Exposure to cosmic radiation (most of which is blocked by Earth's atmosphere) is also a concern. A trip to Mars would mean higher levels of exposure, for longer periods of time, than astronauts have ever experience before. [The Human Body in Space: 6 Weird Facts]

Getting to Mars will probably require some kind of economy in low-Earth orbit, such as assembling spacecraft and even tourism, López-Alegria said.

Private tourism could benefit space agencies that want to better determine what makes someone "fit" to go on space missions, Fogarty said. Companies like Virgin Galactic plan to sell short hops to the edge of space for a relatively low price compared to the millions of dollars that NASA must spend training its astronauts. If those companies collect health data on those passengers, the data could show that a wider range of people can be "fit" for orbit than are currently allowed on missions, Fogarty said.

But what about getting support for a Mars mission, or even a return to the moon? The panelists agreed it might depend on developing a sense of mission that doesn't change from year to year. "How can we all get behind something when that something keeps changing?" Fogarty said.