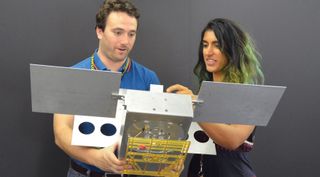 WASHINGTON — Two tiny cubesats, the first NASA plans to send to another planet, will keep watch on the agency’s InSight mission as it descends to the Martian surface in September 2016, an agency official said June 9.

The Mars Cube One satellites (or MarCO) are 6U cubesats, meaning each is built from six standard cubesat modules that measure 10 centimeters on a side and weigh just over 1 kilogram each. MarCO will be NASA's first interplanetary cubesats, according to the agency’s Jet Propulsion Laboratory in Pasadena, California, which is building the spacecraft.

MarCO is not an official part of InSight, the 12th in NASA's Discovery line of cost-capped planetary science missions. The lander, also managed by JPL, will be built Lockheed Martin Space Systems of Denver using heritage parts and designs from the Mars lander Phoenix. InSight is scheduled to launch from Vandenberg Air Force Base on March 4, 2016, and when it does, MarCO will go along for the ride.

Bundled up against the bottom of the second stage of InSight's Atlas V rocket in open-air boxes, the MarCO satellites will separate from the launcher after InSight and fly to Mars separate from the lander. That will be possible thanks to cold gas thrusters, provided by VACCO Industries, South El Monte, California, that enable MarCO to perform the five trajectory correction maneuvers required to reach Mars at the same time as InSight. The cruise from Earth takes about six-and-a-half months.

Cubesats typically lack propulsion systems and so are little thought of as serious ride-along missions to other planets. If MarCO works, Krajewski said, it will go a long way toward proving such spacecraft are worth the mass they take up on a launch vehicle.

If MarCO can make it to Mars, stay in position to observe InSight's descent during the lander's seven minutes of terror, and relay the data back to Earth, it will “show that these are indeed viable technologies for interplanetary missions and feasible on a short spacecraft-development timeline.”

The MarCO mission will cost around $13 million, NASA spokesman Guy Webster wrote in a June 12 email. That includes $9 million to build the two cubesats, $2 million to get them on InSight’s launch vehicle, and $2 million for mission operations.

Should MarCO fail to make it to Mars, or if its radio equipment malfunctions, NASA’s Mars Reconnaissance Orbiter will be around to watch InSight’s landing. However, that orbiter would not immediately be able to transmit InSight landing data to Earth, as it could be busy relaying data from other landed craft.

“Confirmation of a successful landing could be aboard the [Mars Reconnaissance Orbiter] for more than an hour before it is relayed to Earth,” Krajewski said.

MarCO came up during a June meeting of the NASA Advisory Council's planetary protection subcommittee here and has not been widely publicized outside the agency. The mission got some exposure in November at JPL's Mars Cubesat/NanoSat Workshop in Pasadena, when Sami Asmar, a JPL scientist and MarCO's principal investigator, briefed slides about the program.

Like all NASA missions, MarCO has to go through the bureaucratic planetary protection process put in place to ensure agency spacecraft can carry out their missions without crashing into other spacecraft or polluting extraterrestrial environments scientists want to study. MarCO's approval process is ongoing, Krajewski told the NASA Advisory Council June 9.

JPL's other industry partners on MarCO are: