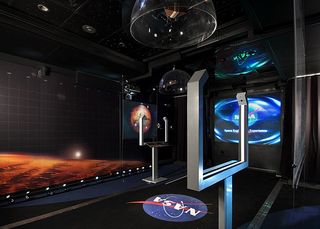 Interior of the first phase of the Vision for Space Exploration experience. This view shows the two kiosks where visitors can use these goalpost "windows" to access information on the Moon and Mars. Image
(Image: © NASA)

There's nothing quite like being able to reach out and toucha piece of the Moon. Knowing that an astronaut (one of only twelve people onthe whole planet Earth) had traveled a quarter million miles across the void ofcislunar space, landed on a barren and dusty surface, stepped out of his cocoonof the lunar module, picked up that rock, then brought it home again, is apretty amazing and daunting thought.

To actually touch this invaluable piece of solar systemhistory yourself is something that is not often available. In fact, there areonly three places on this planet where it is possible: The National Air and Space Museum in Washington, D.C., the Johnson Space Center in Texas, and as part ofa traveling NASA space exhibit that is currently making its way cross country.

NASA's Vision for Space Exploration trailer is a beautifulpiece of public relations for the future of human spaceflight. When ourorganization, the Orange County Space Society, does educational outreach work,we are often asked why this information is not more readily available. Manypeople we come in contact with are surprised at all that is currently happeningin space or planned for the near future. This is the reason OCSS does what itdoes, to make the public aware, and we have been very successful in what wehave accomplished. It is great that NASA is also out there doing this sort ofwork, because, as we all know, you can never have too much positive attentionwhen it comes to the space program.

A decade or so back, I had the opportunity to talk withthen-NASA Administrator Daniel Goldin. I asked him point blank why NASA was notdoing more public relations work to sell NASA to the taxpaying public. Hisanswer took me aback when he said, "NASA doesn't need PR. The success of ourprograms sell themselves."

As most everyone who has ever dealt with the public knows,nothing sells itself. NASA, under the new administration of Michael Griffin,innately understands this and has done something about it. In this case, thatsomething is 72-feet long and 29-feet wide--an expandable semi-trailer has beenconstructed that gives the public a two-phase introduction to the future visionof human spaceflight, with a return to the Moon by 2018 and onward to Mars byabout 2030.

During a recent three-day stay at the Discovery ScienceCenter in Santa Ana, California, many OCSS members were able to not onlyexperience the exhibit first-hand, but to also participate by becoming tourguides to the Moon and Mars, as well as to the Apollo 17 lunar sample that is ahands-on part of the first phase of the exhibit.

I'll let Rudy explain the first phase of the exhibit: "Thestations had a screen, and in front of it a podium of sorts. On the podium wasa roughly two-foot tall sensor that resembled goalposts. The screen showed arotating image of the Moon or Mars with numbers superimposed. The visitor'shand would act as a computer mouse as they would place their hand between thegoalpost and point at a specific number on the image. The computer would thenpull up the relevant information and give a brief presentation on thatparticular topic, such as water on Mars, craters on the Moon, futureexploration of the red planet, or past Apollo missions."

Before leaving this area, visitors could touch the lunarsample. For Debbi, this was a special thrill. "In the moment that I touchedthis little piece of outer space," she said, "I was instantly transported tothose magical days watching the Apollo landings and Moonwalks on my littleblack-and-white television. I imagined being an astronaut some day."

Following this, visitors were ushered through to the secondhalf where they were surrounded by the future vision of exploration by actuallyseeing what it might be like to walk on the Moon or Mars with the explorers.Below the guests, a light-sensitive, interactive video floor showed grey rockson the Sea of Tranquility or iron red ones on Meridiani Planum. Moving yourfeet actually shuffled the rocks as if you were on the real surface.

At the end of the tour, we escorted visitors back to Earthwhere they were able to get a free souvenir of their journey with a photo ofthemselves on Mars or the Moon. All the kids could take these photos to schooland show their classmates what an exciting summer vacation they hadexperienced!

Coming into a functioning exhibit such as this was adifferent experience than doing programs and displays for OCSS. We had to learna specific program to present, along with having the ability to answerquestions intelligently. Our members tend to be pretty well versed already, andmany of us have worked with the public, so it was fairly easy to fall into therhythm of the day's events.

Ray, our resident kiwi, has an excellent knowledge of space,but as he admitted, it still took a bit to get used to program. "Actually, Ifelt a little unsure of myself for the first few tours--somehow there is anAmerican 'patter' that just seems to flow no matter what the tour, and I justdon't seem to have that, so in many ways I hoped that that didn't belie theprofessional exhibit itself, which was terrific overall. It took me a littlewhile to find the answers to questions that were posed to me during themorning, but by the afternoon I felt pretty confident and competent, and bythen I had my own 'patter' going so that it rolled off my lips, too. It didn'tsound entirely 'American,' but I hope it did sound more or less professional."

He certainly need not to have worried. Every reportconcerning all the members who volunteered throughout the event was nothing butexceptional. Thank you again to all those who gave of their time to aid NASAand to get the 2,000 people who toured during our tenure a glimpse of thefuture.

I later discussed the exhibit further with Ray anddefinitely want to pass along some of his insightful observations. Everyonereally enjoyed what they did, and the high-tech approach was definitely cool;however, this approach may not always work best, especially when there islimited time for those who entered the exhibit to get this new knowledge.

As Ray told me, "During the first part of the exhibit thereis quite a bit of time preparing you for what you'll see in the second part. Ifelt that more time could have been devoted to the Moon and Mars exhibits whichnever seemed to have enough time to themselves. In addition, the interactivecursor device using people's waving hands, was clumsy. A lot of time was wastedtrying to get it to work--time better spent actually seeing what there was tooffer, which was very interesting. Couldn't plain old buttons with acorresponding menu have been sufficient? Sometimes high-tech and interactivitycan be overkill, as it was in this case, at the expense of valuableinformation."

Another excellent idea from Ray would be that people shouldhave been polled both before and after to get their thoughts and feelings abouthuman space exploration and the future of NASA. This would have helped gage thetrue success of the exhibit.

NASA had given us free reign to talk about what we wantedduring the tours, as long as we followed basic guidelines for moving the gueststhrough and getting the information across. Debbi augmented her tours by posingsome of the questions Ray felt should have been standard for everyone by asking,"Who wants to be an astronaut? Who wants to go into space?" She said, "I wantedto rev them up for the experience."

For a ten-minute presentation, NASA's Vision for SpaceExploration exhibit did its job well. As it travels across the country, hopefullymany others will be able to see it for themselves. Besides science centers,NASA is taking it to places like county fairs and even car races, so be sure tolook for it.

"All in all it was a very interesting and educationalevent." Rudy told me. "Everyone going through the presentation seemed togenuinely enjoy themselves."

If NASA can get the general public excited by just showing themfilms and computer graphics, just think what the real missions to the Moon andMars will generate in the coming couple of decades--and beyond.

Debbi explained that "in each child I saw the possibilitiesof a real future in space. Each young face lit up with imagination duringtheir magical ten minutes in the dark. I would look and ask myself if thatcould be the face of an astronaut... an explorer... a visionary. As each childleft, without exception, they answered my question, 'I want to go!'"