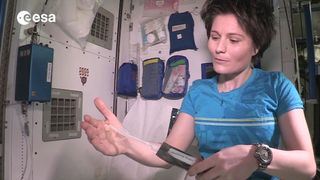 Staying clean in space is a challenge, something that Italian astronaut Samantha Cristoforetti knows well after spending several months on the International Space Station (ISS).

In two videos, Cristoforetti showed off the shower aboard the station, a spot that she called the "hygiene corner," as well as one of the two toilets.

She cited several challenges to keeping clean in space, including the lack of space, limited water and the effects of microgravity. [The Scoop on Space Poop: How Astronauts Go Potty]

"This is the place where I wash, brush my teeth or, after workouts, take a shower ISS-style," Cristoforetti said in a video produced by the European Space Agency.

To stay clean, most astronauts request a Russian-made toiletry pouch among their personal items. The pouch includes toothpaste, a toothbrush and deodorant — enough to last six months, the typical stay aboard the station. Each astronaut is also assigned two towels (one large and one small) every week, and a smaller wet towel every two days.

As water is limited, the astronauts fill a pouch at a nearby water station to the temperature they like, Cristoforetti said. There are two main methods to clean oneself. One is to drape water on the body part you'd like to wash, and the other is to use a towel. The astronaut said the first method is more enjoyable, but takes more time to accomplish.

As for brushing one's teeth, there is the problem of figuring out what to do with the toothpaste at the end, since there is no sink on board. Some astronauts swallow (the toothpaste sent up there is designed for that), but Cristoforetti takes the other option.

Cristoforetti also demonstrated how to wash hair. She squirted a bit of rinseless shampoo into her hair, lathered up and then dried with a towel.

With six people on board the station, working toilet facilities are essential to prevent a big mess from happening. Whether you are about to do "number one" or "number two," Cristoforetti said in a separate video, the principle to stay clean relies on suction.

For urine, the astronauts use a large hose with a cup at the end. The urine gets put into a purification system that eventually turns it into drinking water.

As for defecation, a solid-waste container pairs with the toilet Cristoforetti showed; it is changed every 10 days or so, assuming three crewmembers are using it. There is a "seat" available on it, but as people float in microgravity, most astronauts prefer to lift the seat and use the opening underneath.

"When we are done with our business, we close the bag and we push it down into the solid-waste container, and of course, as a courtesy to the next person, we put a new bag inside," Cristoforetti said.

While Cristoforetti did not mention it on camera, once a solid-waste container is filled, it is put aside as trash. Generally, the solid waste is then placed in a Russian Progress cargo spacecraft to burn up naturally in the Earth's atmosphere when the spacecraft leaves the station.