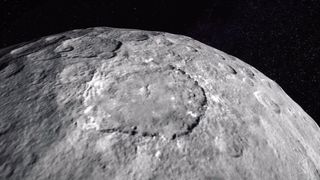 An amazing new video lets viewers fly over and around the dwarf planet Ceres, getting a great look at its heavily cratered surface.

The new Ceres video, which NASA released today (June 8), was created using 80 images captured by the space agency's Dawn spacecraft. Some photos were taken from Dawn's first mapping orbit of the dwarf planet, which lay at an altitude of about 8,400 miles (13,600 kilometers), while others are navigational shots snapped from 3,200 miles (5,100 km) away, NASA officials said.

"We used a three-dimensional terrain model that we had produced based on the images acquired so far," Dawn team member Ralf Jaumann, of the German Aerospace Center (DLR) in Berlin, said in a statement. "They will become increasingly detailed as the mission progresses, with each additional orbit bringing us closer to the surface."

The star field visible in the video was added during production, NASA officials said.

The $466 million Dawn mission launched in September 2007 to study Vesta and Ceres, the two largest objects in the main asteroid belt between Mars and Jupiter. Ceres is about 590 miles (950 km) wide, while Vesta measures about 330 miles (530 km) across.

The two bodies are building blocks left over from the solar system's planet-formation period. So Dawn's observations should help scientists better understand how Earth and other rocky worlds were put together and reveal other insights about the solar system's early days (hence the mission's name), NASA officials have said.

Dawn orbited Vesta from July 2011 through September 2012 and arrived at Ceres this past March. In the process, Dawn became the first spacecraft ever to orbit a dwarf planet, as well as the first to circle two objects beyond the Earth-moon system.