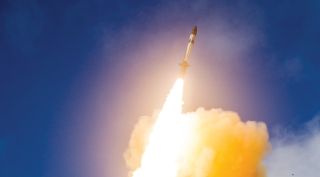 A new missile interceptor co-developed by the United States and Japan launches from a Navy range June 6 as part of its first flight.
(Image: © Missile Defense Agency.)

WASHINGTON – A new missile interceptor co-developed by the United States and Japan made its maiden flight June 6 in a non-intercept test.

The Standard Missile (SM)-3 Block 2A interceptor, developed under an agreement signed in 2006, is a bigger and more capable version of the Raytheon-built SM-3 Block 1A and 1B interceptors, which are part of the U.S. Missile Defense Agency's sea-based Aegis Ballistic Missile Defense system. Designed for deployment on ships or on land, the Block 2A features second and third stages that are wider, at 53 centimeters, than those on the current SM-3 variants, giving it the range and velocity needed to engage medium and intermediate-range ballistic missiles.

In the test, the missile launched from the Point Mugu Sea Range on San Nicolas Island in California, according to a June 7 press release from the MDA. The test was designed to provide performance data on key components of the interceptor, including its nose cone, steering control mechanism, and booster separation systems. [The Most Dangerous Space Weapons Concepts]

The test did not involve the launch of a target missile. The first intercept test of the SM-3 Block 2A is planned for 2016. Full rate production of the interceptor is targeted for as early as 2017. That would be followed by deployment on land and at sea in 2018, government and industry officials have said.

The SM-3 Block 2A is a key part of the European Phased Adaptive Approach for defending NATO allies, which is centered around the Lockheed Martin-developed Aegis Weapon System, the SM-3, and a network of ground-, air- and space-based sensors. The EPAA currently relies on sea-based SM-3 Block 1A and Block 1B interceptors, but subsequent phases will see SM-3 variants, including the Block 2A, deployed on land.

"The SM-3 Block 2A program reflects the MDA's commitment to maturing this capability for the defense of our nation, deployed forces, and our allies abroad," Taylor Lawrence, president of Raytheon Missile Systems of Tuscon, Arizona, which has the lead U.S. industrial role in the program, said in a prepared statement. "The success of this test keeps the program on track."

The first flight test came about one year later than MDA officials had expected in 2010.

The total anticipated U.S. cost for Block 2A development is $2.3 billion, according to MDA budget documents.  The U.S. 2015 contribution to the co-development effort was about $263 million, and the agency is seeking $173 million in 2016.

Raytheon is under contract to co-produce 22 Block 2A interceptors for developmental testing.

Japan has committed $1 billion for its portion of SM-3 Block 2A development-phase work, with Tokyo-based Mitsubishi Heavy Industries as prime contractor. Mitsubishi is responsible for the interceptor's second- and third-stage motors and nose cone.